The day that changed my life: speaking with transplant recipient, Graeme When Rockhampton local Graeme Dougan went for a GP visit in his early 50s, he never suspected that his kidneys were on the brink of failure. He was fit and had no symptoms of any major health concerns. As Graeme would tell you, he always felt wonderful.

After Graeme’s GP noticed his blood test results were abnormal, he was sent to see a nephrologist (kidney specialist). The news that followed floored him. Graeme’s kidneys were irreversibly damaged, and he would one day need dialysis.

Graeme shares his story from diagnosis and dialysis, and the moment his life was transformed through organ donation.

The silent condition he never knew he had

So what caused such serious kidney damage without Graeme realising it?

“It was because of uncontrolled high blood pressure over a long period of time. I didn’t know I had it,” Graeme said.

Like many Queenslanders, Graeme only ever visited his GP when he felt quite unwell. His infrequent doctor visits, combined with the lack of symptoms, meant that he was oblivious to the damage his high blood pressure was causing. The damage was so great that Graeme would eventually need dialysis, but it wasn’t clear when – his kidney failure progression could be fast or slow.

Graeme did everything he could to support his health, including daily physical activity and maintaining a healthy diet. After retiring, he joined the gym and took part in regular sessions for seniors. Before he knew it, 17 years had passed since he first received his diagnosis, but he knew he couldn’t evade dialysis forever. “I was eventually diagnosed with final-stage renal failure. My kidney function was almost non-existent – I was very close to being in the box,” said Graeme. “It was time to start dialysis.”

But if you met him that day, you wouldn’t have thought his kidneys were barely working.

“Surprisingly enough, the day I started dialysis, I went to the gym in the morning. I told the nurses at the renal unit, and the looks of disbelief on their faces were priceless. I felt absolutely wonderful, they couldn’t believe it,” he said.

Unlike his kidneys, Graeme’s zest for life never failed him. But starting dialysis was a huge adjustment.

“What a shock to the system! Connected to a machine, three days per week, for many hours at a time,” said Graeme. He now relied on the dialysis machine to take over the vital job of filtering his blood. He also had to change his diet, physical activity, and plan his life around dialysis.

“There were a lot of restrictions on what I could do, where I could go. For example, if we wanted to go away on a holiday we had to find somewhere to have dialysis, and then find a time they could fit me in, even before we started planning the actual holiday,” said Graeme. But Graeme and his wife Lorraine were energetic and motivated, and they made it work.

Waiting for a donor kidney

Dialysis kept Graeme well, but he wasn’t able to live the vibrant life he once had. He started to investigate whether receiving a kidney transplant was an option for him.

“By this time, I was nearing my seventieth year. Having heard that it is difficult to be given a transplant at this age, I thought it would never happen,” said Graeme.

He took part in interviews and assessments and was told that if he could lose a few kilograms, he would be a suitable transplant candidate. Graeme lost the weight and joined the waitlist.

“The greatest thing that ever happened to me”

Graeme and Lorraine were on holiday in Caloundra when he received the call that changed his life. He remembers it like it was yesterday; it was 7 o’clock and he had just finished eating dinner after a round of dialysis. It was the news he had long hoped for but never expected would come.

Graeme didn’t miss a beat – in the 30 seconds between phone calls from the doctor, he was already making plans.

“I said to Lorraine, ‘Start packing! We’re going to Brisbane, they’ve got me a kidney!

That was when my life changed – that fateful day in September 2013.”

A few short hours later, Graeme reported to the Princess Alexandra Hospital’s emergency department and was swiftly admitted. The surgery went ahead, and everything ran like clockwork. 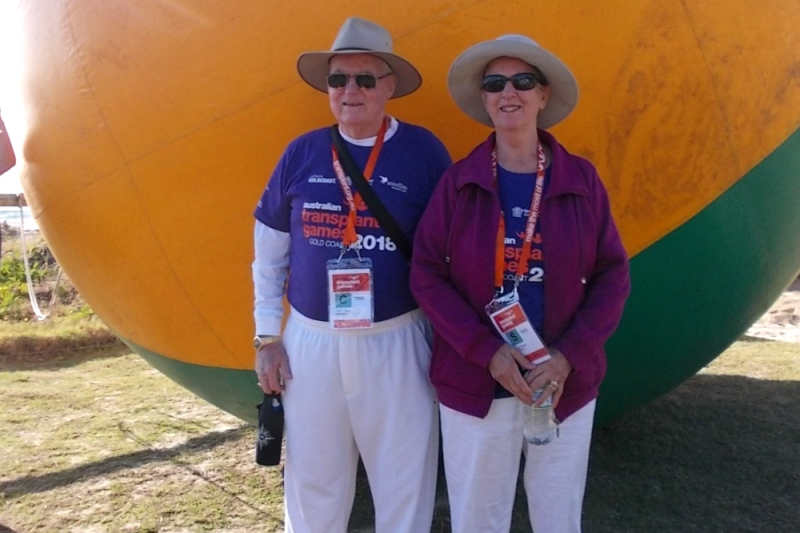 A new lease on life

The transplant was followed by an eight-week stay in Brisbane, where Graeme attended post-surgery rehabilitation. He couldn’t believe how quickly his life had changed – the donor kidney had opened Graeme’s world up, and his deep feeling of gratitude has never faded.

“I’m one of the very lucky transplant recipients – I have had no rejection problems, no complications.

It was the start of a second chance at life. I cannot thank my donor family enough.”

Six years later, Graeme continues to make the most of every moment. He goes to the gym, walks daily and plays lawn bowls. In 2018, he participated in the Transplant Games in the Gold Coast. He enjoys time with his wife and son, who have been a constant source of support throughout the experience.

Graeme uses every opportunity he can to tell his story and spread two very important messages.

“I may be a little biased when it comes to organ donation, but I have a really good reason to be biased. One person can save numerous lives by being an organ donor,” said Graeme.

Graeme encourages people to check whether they’ve joined the Australian Organ Donor Register and have a conversation about organ donation with their loved ones. He also has an important piece of advice that could help others avoid being in a similar situation.

“Look after your kidneys as best you can. This includes having your blood pressure checked on a regular basis. Routine blood tests can help keep an eye on your bloods so that issues can be addressed before they get out of hand. Also, keep your fluids up!”

Listen to the above episode of My Amazing Body for more information about the kidneys.

Are you a registered organ and tissue donor?

Graeme’s situation isn’t that unique. Around 1,400 Australians are currently waitlisted for a life-saving organ transplant, and another 11,000 Australians are on dialysis. For many people with kidney failure, a transplant could dramatically improve their health and wellbeing.

Almost everyone can donate organs and tissue. And while most Australians are willing to become an organ and tissue donor, only one in three have joined the Australian Organ Donation Register.

If you want to be considered a donor, there are just two things you need to do:

You can find out more through the Donate Life website.

By deciding to become an organ and tissue donor, you could one day transform people's lives. Graeme is living proof.

Graeme would like to thank the nurses at the renal unit at Rockhampton Hospital, the transplant team at the Princess Alexandra Hospital, the doctors and specialists who provided treatment, his donor family, and his wife Lorraine and son Stephen for their constant support.