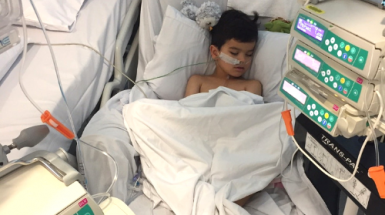 It seemed like a simple case of gastro. But when Jobe’s symptoms started getting worse, his parents knew something wasn’t right.

When five-year-old Jobe woke in the middle of the night feeling unwell, his parents Rich and Erin knew the drill. A stomach bug had been going around, and Jobe’s symptoms – a sore tummy and vomiting – were typical of gastro.

But when Jobe’s symptoms started to get worse, his parents began to question whether it might be something more serious. Their instincts were right – a trip to the emergency department revealed Jobe’s appendix was seriously infected, and only hours later he was in surgery.

Rich and Erin share their story of Jobe’s appendicitis and recovery in hospital, and how seeking timely medical advice helped their son receive the care he needed.

A suspected bout of gastro

As parents of four, Rich and Erin have seen their fair share of tummy bugs. So when Jobe woke his parents at midnight with stomach pains, they were alert but not alarmed.

“He came in complaining of stomach pain, and then he started vomiting. There had been a lot of gastro going around, so I thought ‘OK, we’ve got gastro’. We followed normal gastro procedures,” Erin said.

Jobe didn’t have a temperature or fever and his pain was manageable. From their previous experience of stomach bugs, they expected Jobe’s illness to subside in the next 24-48 hours. They watched his symptoms closely and kept him hydrated and as comfortable as possible.

As the 48-hour mark approached, Rich and Erin saw that Jobe hadn’t gotten better. In fact, his symptoms were starting to get worse.

“He had to be in a certain position or it really hurt, and that’s when we started thinking this isn’t normal. That’s when Rich said, ‘maybe it’s appendicitis’,” said Erin. “I assumed it would be a classic stabbing pain on the right side, but he wasn’t complaining about that. He was always just pointing to his general stomach area.”

While Jobe’s symptoms didn’t appear to be the well-known signs of appendicitis, his parents knew something wasn’t right.

“We just thought, ‘let’s just go and get it checked out’,” said Rich. Rich took Jobe to their nearest emergency department at The Prince Charles Hospital.

While in emergency, Jobe’s symptoms began to worsen. His stomach distended and his pain levels increased. A doctor assessing Jobe’s condition soon determined the cause.

“As soon as one of the doctors looked and touched, instantly she said, ‘this is appendicitis’.” 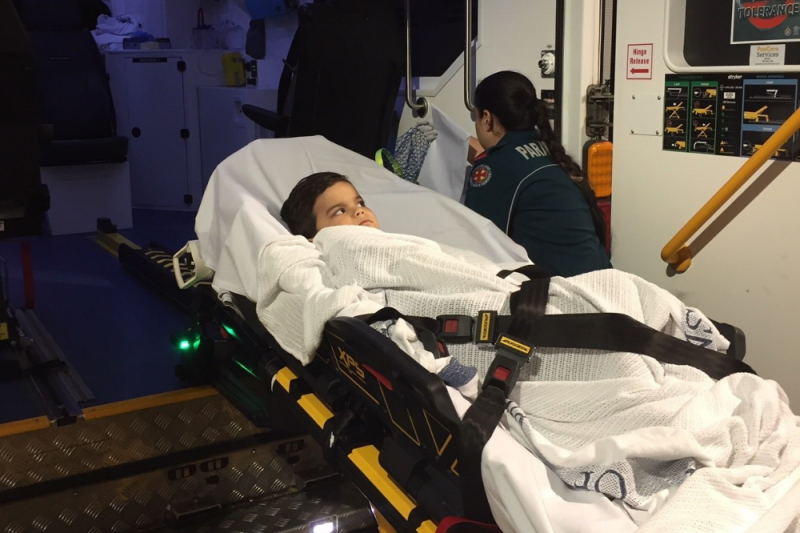 The appendix is a small tube-shaped pouch that is attached to the large intestine. Appendicitis occurs when the appendix becomes inflamed and infected. The exact cause of appendicitis isn’t clear, but it may be due to food or faeces getting lodged in the appendix.

Appendicitis can occur at any age but is more common among children and young adults.

Symptoms of appendicitis can include:

Young children may not be able to pinpoint the precise location of their pain and may instead complain of general tummy pain. In both children and adults, it is common to mistake the symptoms of appendicitis with other conditions like gastro.

If an infected appendix bursts or perforates, the infected matter enters the abdominal cavity. This can cause severe worsening symptoms including pain and collapse, and requires immediate emergency treatment.

Appendicitis is usually treated by removing the appendix in an operation known as an appendicectomy. The length of stay in hospital depends on the severity of the appendicitis. For uncomplicated cases, children can usually go home the day after the operation. In more complicated case, including a burst appendix, children typically stay for three to five days.

Following the diagnosis of appendicitis, things began to move quickly for Jobe and his parents.

“The speed in which they reacted made us feel really concerned that we didn’t bring him earlier. By the time he got transferred to the Children’s Hospital it was two in the morning, and they said, ‘We’re doing surgery in the morning’,” said Rich.

“Jobe’s parents did everything we would advise parents to do – treat the symptoms, and if the pain is not improving, there are new symptoms, or they are concerned, then to present to their local GP or emergency department for review. Once diagnosis of appendicitis is made, we tend to act promptly to avoid things getting worse,” said Dr Roberts.

In the 12 hours between arriving at emergency and undergoing surgery, Jobe’s appendix had burst. His surgery took place first thing in the morning, and then he was on the slow road to recovery.

“The surgery itself was a flash in the pan, but it was a 10-day gradual process of getting better. Every day was like a new challenge,” Rich said. 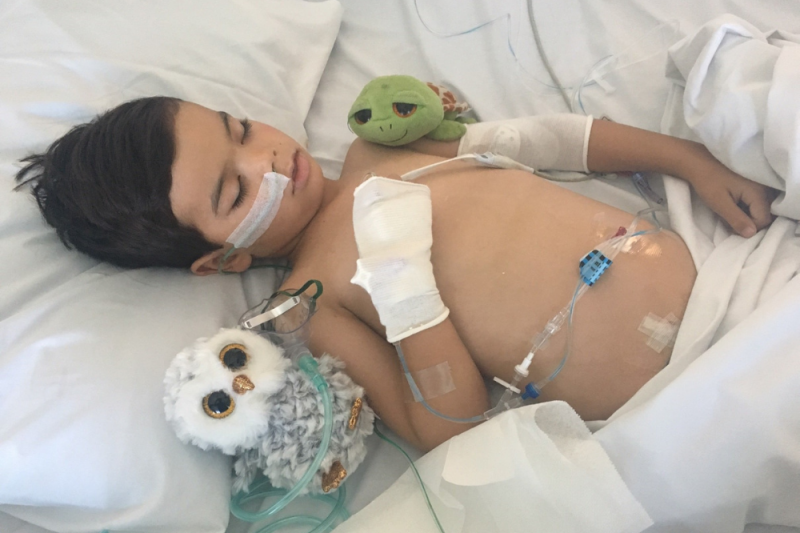 “The surgeon would come once a day, and they set the rhythm for the next 24 hours – this is where he’s at, here’s where he needs to go, and then the nurses and physios would all respond to that. It was all about getting his body functioning again,” Rich said.

During Jobe’s stay at the Queensland Children’s Hospital, Rich and Erin played a very active role in helping him recover. Routine activities – including walking and breathing more deeply – needed a lot of encouragement and practice, but Jobe made progress every day.

“The medical team were saying that often it’s hard for parents to push someone who’s already been through all of that. They’re so little and they’ve got all these things hanging off them... but they made it pretty clear that the best thing for Jobe was to do it – to push through that,” said Erin.

Surgery can be a daunting experience for young children, and the support of parents and medical staff is vital.

“Children with complicated appendicitis – the worse end of the spectrum – tend to experience an ‘ileus’, where the gut goes to sleep for a few days after an operation. Pain and abdominal distension interfere with normal deep breathing, increasing the chance of developing pneumonia,” said Dr Roberts.

“It takes time for things to start working properly again, and lots of support from the nursing staff, physios, nutrition team and all the people involved in caring for children to ensure they recover as fast as possible.”

Active recovery with a personal touch

Rich and Erin are grateful for the medical team who supported Jobe during his hospital stay, and who gave them comfort during a very difficult time.

“The people at the Children’s were amazing. The surgeons were so nice to us,” said Erin. “I said to them, ‘Should we have known earlier?’ because it burst – that seems pretty extreme. But they were so good at reassuring us that for 5s and under, they generally burst.”

Dr Roberts explains why young children are more likely to have complicated appendicitis like Jobe did.

“Children under five often present having had symptoms for longer than in Jobe’s case. It can be difficult to diagnose as they often have similar symptoms to gastroenteritis, and so if there is any doubt, we would arrange an ultrasound to look at the appendix. It is important to be aware of the possibility of appendicitis if symptoms are not improving within 24-48 hours in children under five years old,” said Dr Roberts.

The care shown by surgeons, nurses, and everyone involved in Jobe’s recovery made all the difference to Jobe and his parents.

“There was not a single nurse that wasn’t amazing,” said Rich. “I heard the nurses before they’d come in to introduce a new nurse, and they’d say, ‘This is Jobe, don’t ask him how he’s going, he hates it’.”

“Jobe is a lot like a grumpy old cat; he’s friendly but often he just wants everyone to go away,” said Erin. “He’s our surly one!”

“One nurse said, ‘Sometimes I speak to him and he’ll close up, so I’ll just walk out for 10 minutes and give him a break and come back and try again’. It was so nice that they had that personal touch,” Rich said. After 10 days in hospital, Jobe returned home. He was still recovering but he had come a long way. A few months on and Jobe only has the tiniest of scars to show for his ordeal – and some bragging rights among his siblings.

“He was happy he was the first one to be in an ambulance and to have an operation!” said Erin.

Trust your instincts and seek out medical advice (not Dr Google)

Rich and Erin said they were glad that they didn’t hesitate to seek timely medical advice.

“If you Google it, you could get both extremes. You could underplay it or overplay it. Just go to emergency and get it checked out,” said Rich.

“Every time we’ve ever been to emergency, especially at Children’s emergency, they’ve never said you shouldn’t be here. Sometimes they treat it and we think perhaps we didn’t have to come, but it’s never a shame or a judgement. If it seems serious enough, I’d just advise everyone to go,” Erin said.

All Queenslanders have access to expert medical advice 24/7 by calling 13 HEALTH (13 43 25 84). 13 HEALTH is a confidential phone service where you can speak with a registered nurse for health information and assessment of symptoms. 13 HEALTH nurses will provide you with a recommendation for when and where you should seek treatment.