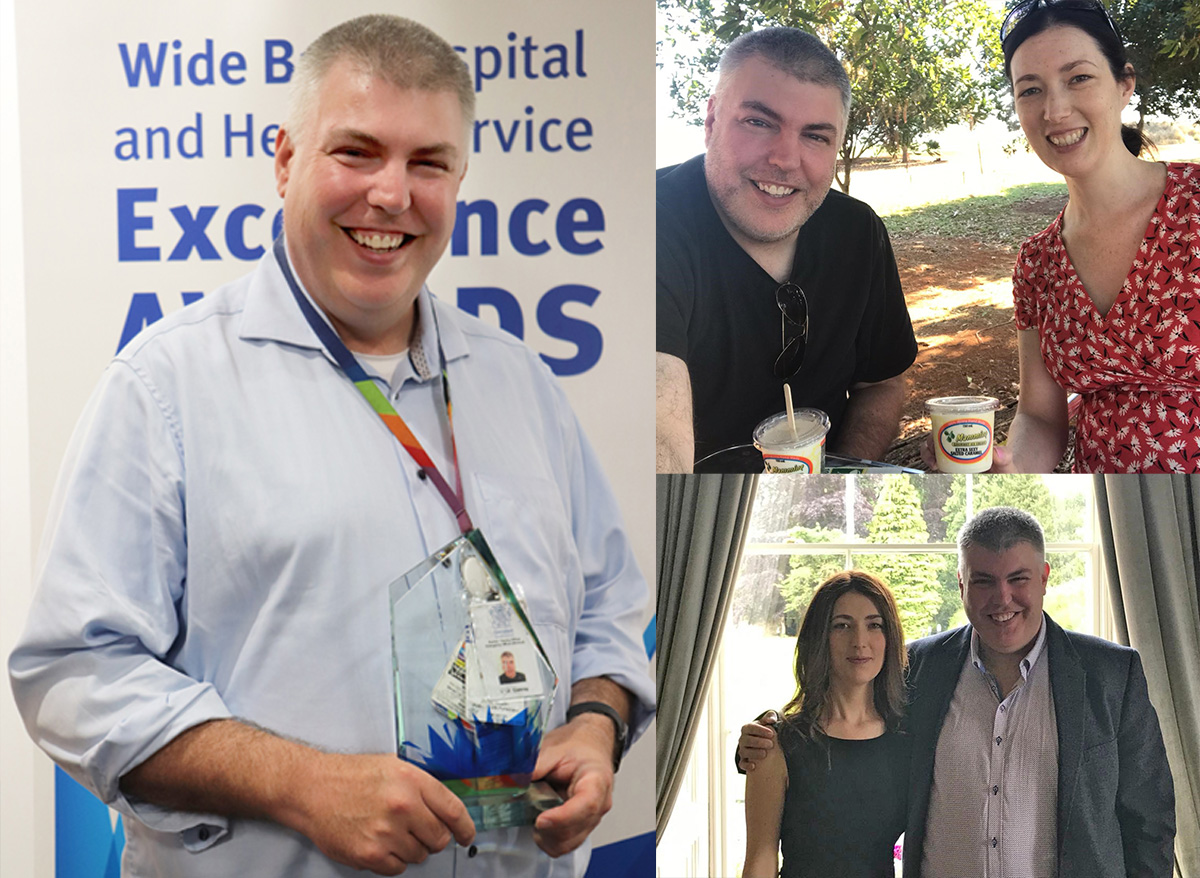 TO SAY 2020 has been big for Dr Niall Conroy is probably one of the great understatements of the year.

The affable Irishman joined Wide Bay Hospital and Health Service in late January to take up a role as the region’s new public health physician, and was expecting a quiet and well-planned handover from retiring physician Dr Margaret Young.

Instead, he walked into the beginning of a global pandemic and had to hit the ground sprinting in what everyone kept on saying would need to be a marathon effort.

Dr Conroy has maintained a frenetic pace ever since, with barely a day off during what will doubtless end up being one of the most memorable years of his life – not least because he and wife Michelle are expecting their first baby just in time for Christmas.

“This year has brought challenges for all health services across the world, and probably brought a greater focus on public health than we’ve seen for some time,” the 43-year-old said.

“It’s difficult to explain the scale of work that’s been required throughout the COVID-19 pandemic. It’s not just about confirming and treating positive cases, and contact tracing and containment – although they’re obviously incredibly important. But they’re probably the most visible parts of our pandemic response.

“A lot of the other work that’s gone on behind the scenes has included supporting our own facilities as well as a range of other health and other community service providers with preparation and response plans, making sure public events have had effective COVIDSafe management plans in place, and helping our local businesses and organisations to manage in the new operating environment.

“On top of all this, our Public Health Unit needed to be able to continue all the other work we do on a regular basis, such as food and water safety, immunisations and other communicable disease management.”

That effort hasn’t been without reward, though.

So far, there have been just 25 confirmed cases of COVID-19 in the region, thanks in part to strong planning and rapid and comprehensive health service responses – including a positive case in a farm worker in Bundaberg, requiring multiple people to be quarantined and mass rounds of testing.

And earlier this month, Dr Conroy was presented with the top honour at WBHHS’s annual Excellence Awards – the Every Value, Every Day award, recognising someone who demonstrates all the organisation’s values to an exceptional standard at all times.

But without a doubt the best way to end such an eventful year will be the arrival of his first child, with he and Michelle expecting a baby boy on December 23.

That the baby was even conceived was a bit of a miracle in the first place, given that Michelle arrived in Australia with just days to spare before the international border was closed.

“She’s a teacher and was initially supposed to come for a visit, return to Ireland for a term and then move over permanently – but she arrived just in the nick of time and then she was here for good,” Dr Conroy said with a laugh.

“That was very lucky, really, because otherwise I’m not entirely sure how I would have coped without that support at home.

“But my colleagues are telling me that I’ll be well practised at having no sleep when the baby’s born, because I’ve hardly had any this year anyway!”

The physician’s road to Wide Bay – and public health – has been an interesting one.

Initially intent on emergency medicine, as a young medical student he spent a placement in South Africa, at Johannesburg’s busiest trauma hospital. What he found there set him on a different path.

“I realised people were dying from AIDS in huge numbers because they didn’t have access to anti-retroviral drugs. In some parts of the country at that time, two in 10 adults had AIDS – it was staggering,” he said.

“That was my first step into public health.

“And everyone was telling me that paediatricians were what were really needed. In Africa, nearly half of the deaths in children under five happen in the first month – in the neonatal period – so I started taking an interest in newborn health as well as broader public health.”

After qualifying as a doctor in 2004 and spending his intern year in the UK, Dr Conroy spent the next few years working in paediatrics in Scotland, New Zealand and Australia, before staying on in Australia to work in public health for several years, mostly in Brisbane.

More recently he has held academic and lecturing roles at the London School of Hygiene & Tropical Medicine and University College Dublin’s Centre for Emergency Medical Science, prior to which he spent some time working in developing countries such as Somalia and Nepal.

But it was during 2013 and 2014, when he worked in paediatrics in Sierra Leone, that he forged a connection with a hospital and team that still endures today – and continues to benefit families in one of the world’s least developed nations.

On his arrival at Bo Government Hospital, in the country’s interior, Dr Conroy saw he could make an almost instant difference.

There was no electricity. No running water on the wards. Snakes weren’t an uncommon sight around the hospital. It was a far cry from the medicine he knew in the Western world.

“Your practical and clinical skills become really polished in developing countries, because you realise what you can – and have to – do without machinery,” he said.

“But I also knew that we could be doing better by the women and children there.

“When I first got to Bo, there were virtually no newborns being brought to the hospital, because usually if kids got sick at that age, they would just be taken home to die.

“Hardly any were being admitted – perhaps five to 10 a month.”

But there’s a new future for babies in the region, thanks to the continued efforts of Dr Conroy –­ who tries to spend short stints there each year as much as possible – and others he’s been collaborating with at the government hospital.

“Two years ago, I went over to establish the first neonatal unit, and they’re now seeing about 100 babies per month admitted,” he said.

“There’s still a lot of work to do. We need to build a dormitory for mums, so they have somewhere to stay when their children are in hospital.

“And we’ve had some really amazing support there over the years. Out of sheer frustration one day a couple of years ago, I tweeted something about the terrible conditions we were caring for babies in.

“Someone in the UK saw it, and it led to a fundraising campaign that helped us to get a £100,000 (AU$178,000) solar-powered electricity system for the neonatal unit.

“Obviously COVID-19 has made international travel virtually impossible at the moment, but I’m trying to maintain an interest in the hospital in Bo, and balancing that with trying to do myself out of a job there.”

If there’s one thing that’s certain, it’s that he won’t be out of a job in Wide Bay any time soon, with plenty of work still required to support the COVID-19 response effort in various ways, not to mention the multitude of other public health responsibilities he and his team oversee.

But he is about to take his first decent break in the past 12 months, to welcome the birth of his son. And with his history in public health and newborns, it’s safe to say that Baby Conroy will be in good hands.