Dengue fever outbreaks begin in Queensland when someone is infected with dengue overseas and arrives with the virus in their blood. This is called an imported case. A local Aedes aegypti mosquito bites this person, becomes infected with the virus, and then passes it on to other people by biting them. These are known as locally acquired cases.

The dengue virus does not spread directly from person to person.

There are four types of the dengue virus that cause dengue fever – dengue type 1, 2, 3 and 4. People become immune to a particular type of dengue virus once they've had it, but can still get sick from the other types of dengue if exposed.

Catching different types of dengue, even years apart, increases the risk of developing severe dengue. Severe dengue causes bleeding and shock, and can be life threatening. There have been deaths in Queensland from severe dengue.

Dengue fever is found in Africa, the Americas, the Mediterranean region, South-East Asia and the Western Pacific region. It is endemic in around 100 countries, which means the virus is always there, ready to be spread by dengue mosquitoes.

There are large outbreaks of dengue fever every year in many South-East Asian and Pacific countries. This is where many people catch dengue and bring it in to Australia. In Australia this is known as an imported case.

Increased holiday and business travel to dengue endemic countries has meant that dengue fever is able to spread from country to country easily, making outbreaks more common. Every year, the number of dengue cases around the world is increasing.

Mosquitoes that can transmit dengue

The Aedes aegypti mosquito is the main type of mosquito that transmits dengue fever and is found in many tropical countries around the world including north and central Queensland and parts of southern Queensland.

The Asian Tiger mosquito, or Aedes albopictus, is another type of mosquito that can spread dengue fever but in Queensland is currently only found in the Torres Strait, however there is a significant risk this type of mosquito will spread to the mainland of Queensland.

Where mosquitoes that transmit dengue are found

The Aedes aegypti mosquito is found in north and central Queensland and some areas of southern Queensland. 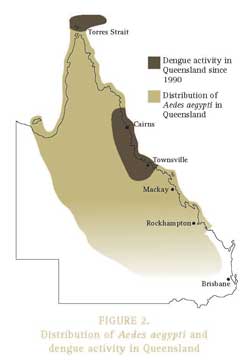 Each year dengue fever outbreaks can occur in north and central Queensland, which is why it is especially important for everyone in those regions to know how they can protect themselves and their families from dengue fever.

Read about how to prevent the spread of dengue and other mozzie borne diseases.

In the past the Aedes aegypti mosquito was found right across Queensland, in parts of the Northern Territory and northern New South Wales. There is a chance this mosquito may re-establish in these areas and increase the risk of dengue fever spreading. Aedes albopictus a second mosquito that can transmit dengue is only found in Torres Strait, but there is a significant risk this mosquito may spread to the mainland of Queensland.