Coeliac vs Crohn's—what's the difference? Everyone gets a digestive upset, with diarrhoea, nausea, gas, or pain, at some stage.

But if it’s ongoing, or has other symptoms, such as sores, or inflamed eyes or joints, you could have a more serious digestive condition such as coeliac disease or Crohn’s disease.

They share some symptoms, but they are different conditions. Some people can have both. So, what's the difference?

Gluten is a naturally occurring protein in—in many grains, such as wheat, barley, oats, and rye.

The small intestine has little finger-like projections called villi that help absorb food by increasing its surface area. Coeliac disease inflames and flattens them, and the damage can lead to: 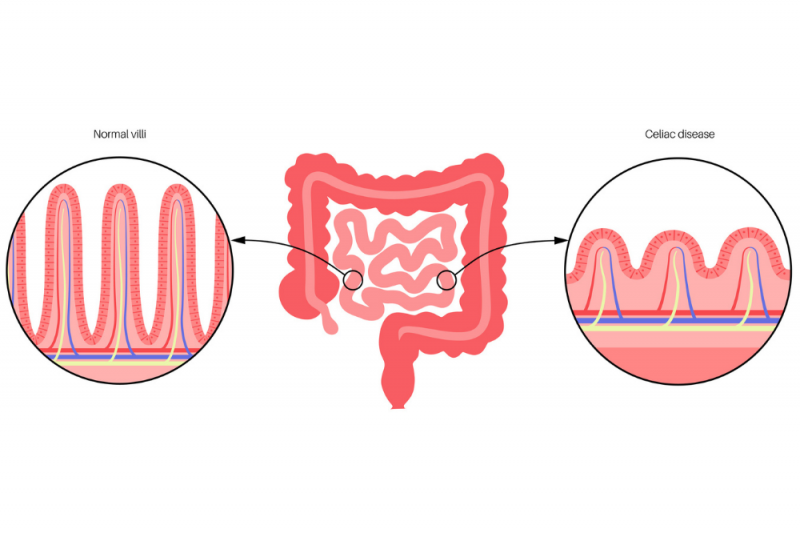 Other complications of untreated coeliac disease can include:

Coeliac disease affects all ages, but more often (about 60%) of people who are biologically female, than male.

Crohn’s disease is an inflammatory bowel disease (IBD) and an autoimmune condition. It causes inflammation with swelling, tenderness, and redness in the lining of the digestive tract.

It can affect any part of the digestive tract from the mouth to the anus. But more often, the end of the small intestine and/or the large intestine.

The full thickness of the bowel can be impacted, causing narrowing, blockages, holes, and abscesses. 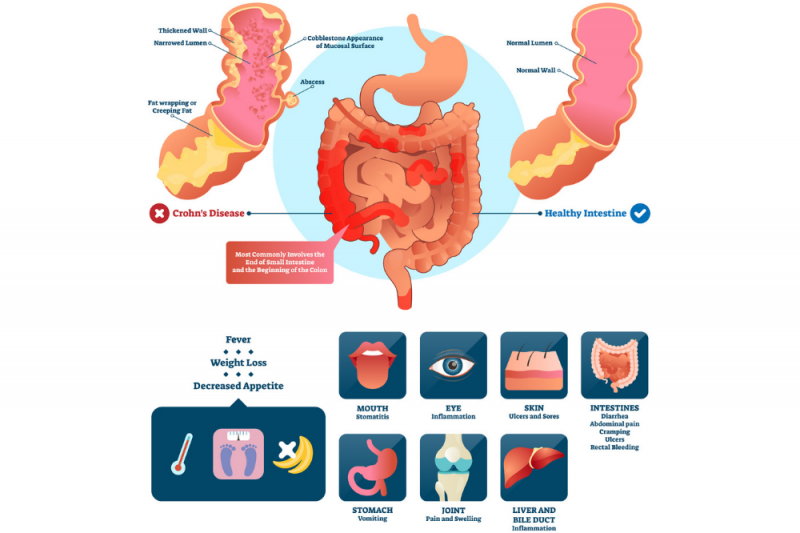 As the disease progresses, the following symptoms:

Crohn’s disease happens in biological males and females equally. It can start at any age, but most commonly affects people in their late teens and 20s.

Crohn’s is lifelong and at times people can experience no symptoms, or ‘flare ups,’ which is when symptoms increase. It can be painful and impact the quality of life.

The exact causes are of coeliac disease and Crohn’s disease are unknown. Recent research suggests that the two diseases are genetically similar with a small number of genes that can make you more likely to get them. The diseases are thought to start from an interaction of certain genes with the environment, or certain triggers.

People who have one or both parents with Crohn’s or ulcerative colitis are more likely to develop it.

It’s possible that the diseases are triggered by a virus or bacterium, but scientists have not yet identified such a trigger.

Coeliac and Crohn’s can have these symptoms in common:

The two diseases have important differences.

Your doctor or specialist gastroenterologist will:

The main treatment for coeliac disease is to immediately cut out all foods containing gluten. Inflammation of the gut should then improve. If the intestine is badly damaged, some people will need treatment with steroids to reduce the inflammation. Most people with coeliac disease will need to avoid gluten-containing foods for the rest of their lives. The list includes:

There is no cure for Crohn’s disease but with medication and lifestyle changes can be managed.

Medications given depend on how Crohn’s disease affects a given person and can change over time. They include: