What's the go with BO? 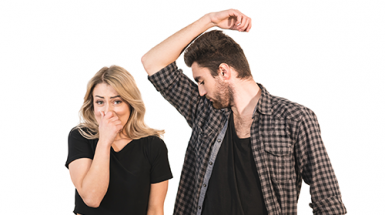 Don’t stress, it’s completely normal to have some body odour (BO)—a general term given to the unique smells given off by every human. These smells can range from faint to strong, from pleasant to not so much.

Various parts of the body can give off different smells, but for the purposes of this blog, we’ll restrict ourselves to what most people mean when they talk about body odour—the smells created by the interaction of bacteria on the skin, dead skin cells, and sweat and its chemical contents and by-products.

Sweat is released by sweat glands in your skin that come in three different types—eccrine, apocrine and sebaceous.

From birth until puberty (sexual maturity), only the eccrine glands are active. They’re in your skin almost all over your body, and when your body temperature rises, they release fluids (sweat) onto the skin that cool the body by evaporation. This sweat usually doesn’t have much smell.

The apocrine glands become active around the time of puberty in the hairier body areas such as your groin and your armpits (there are also some around your navel and nipples). The apocrine glands release a thicker milky fluid that doesn’t have much smell itself, but when certain compounds (mainly proteins) in this fluid are metabolised by bacteria on your skin, smelly substances can be produced.

Waste products excreted through skin, such as metabolised alcohols or organic sulphur compounds found in foods such as garlic and onions can also cause smells.

Just like with other animals, smell, including body odour, plays an important role in the interactions of humans.

Some cultures have customs of sniffing each other on greeting.

Humans can literally smell family. Research has shown that humans can detect blood relatives by their smell, and mothers can identify by body odour their biological children, but not stepchildren. Before adolescence, siblings can identify full siblings by smell, but not half siblings or step siblings. Babies can recognize their mothers by smell while mothers, fathers, and other relatives can identify a baby by smell.

Studies suggest that body odour cues play a role in mate selection in humans and may provide significant cues about a potential mate’s genetics, reproductive status and health.

It’s interesting to note that in human body odour terms, the armpit area seems more important than the genital area, which may have something to do with the fact that humans walk upright, and the armpits are closer to other people’s noses

The simplest way to get rid of body odour is to shower or bath regularly, getting rid of bacteria on the skin and keeping regrowth under control.

Using soap when you bath or shower helps control the naturally occurring bacteria. Some people may benefit from anti-bacterial soap if normal soap and water doesn’t seem to be doing the trick.

It’s recommended to dry off thoroughly immediately after a shower or bath to slow down the growth of bacteria, which thrive in moist conditions.

Clothing can make a difference. If your skin stays wet, it gives skin bacteria more chance to grow and metabolise compounds in your sweat. Good air flow and evaporation can help keep your skin dry.

Some synthetic fabrics are very tightly woven and do not allow good air flow or evaporation and can impact body odour. Modern synthetics used in leisure and sportswear can be an improvement, as they are designed to be breathable and wick moisture away from the skin.

For everyday use, breathable natural fibres such as cotton, silk and wool can keep you drier.

Clothes also need to be kept clean and smell free by regular washing.

Although they can make clothing smell good at first, fabric softeners coat the surfaces of fabrics and their fibres, blocking air flow and evaporation.

Eating spicy foods with lots of chilli can make you sweat more. Garlic, onions, shallots, and chives can release sulphur-containing organic compounds when they’re broken down in your body that can affect the way your sweat smells.

Coffee and tea, or other drinks with caffeine can make you sweat more, as can alcohol.

Illicit drugs such as methamphetamine, MDMA, cocaine, and heroin can also cause you to sweat more.

Prescription and over-the-counter drugs can affect sweating and body odour. If you suspect this is the case, talk to your doctor or pharmacist.

If you sweat excessively (hyperhidrosis) or have persistent bad body odour, it’s time to talk to your doctor as you may need to see a dermatologist. They can be treated with antiperspirants, prescription medications, botox injections, iontophoresis (an electrical bath treatment), and in extreme cases, even surgery.