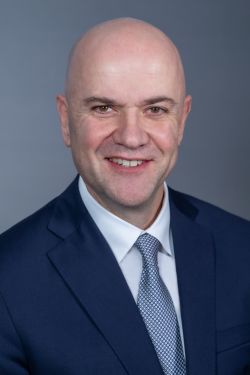 Dr Gerrard completed his medical and specialist training in Sydney and London between 1980 and 1993 quickly becoming one of Australia’s leading infectious disease specialists. As a young doctor in 1993, Dr Gerrard rewrote Australia’s medical history by identifying the country’s earliest known case of AIDS.

Dr Gerrard moved to the Gold Coast in 1994 to take up the post of Director of Infectious Diseases at the Gold Coast Hospital. Like many other Australians, he first visited Queensland for Expo 88 and immediately fell in love with it.

The international threat of SARS in 2003 highlighted to Dr Gerrard the deficiencies in existing hospitals when it came to the risk of airborne infectious diseases. This led Dr Gerrard to help design the new Gold Coast University Hospital with the capacity to safely manage a pandemic such as COVID-19.

Throughout his time on the Gold Coast, he developed an international reputation for research in emerging infectious diseases and an organism called “Heterorhabditis gerrardi”, that glows in the dark, was named in his honour by American researchers in 2009. He is the only living Australian with a human pathogen named after him.

Since 2011 Dr Gerrard has been the principal investigator on a series of malaria vaccine trials in collaboration with Professor Michael Good from the Institute for Glycomics.

In 2014, he travelled to Sierra Leone during the West African Ebola epidemic. There, he formed part of a team that established Australia’s first Ebola Treatment Centre outside Freetown. Subsequently, he was awarded the Australian Humanitarian Overseas Service Medal.

More recently, Dr Gerrard managed Queensland’s first cases of COVID-19 when three families travelled from Wuhan, China in January 2020. Shortly after, he travelled to Tokyo as part of a mission to assist Japanese authorities in containing the outbreak of COVID-19 aboard the Diamond Princess.

These experiences led him to establish the GCUH as a COVID-designated hospital in 2020 in preparation for the arrival of the pandemic.

In April 2021, Dr Gerrard travelled to the Dutch Antilles as part of a Dutch-sponsored mission where he first experienced the full impact of COVID-19.

Dr Gerrard enjoys cycling and building and flying model aircraft. He is fluent in French. He and his wife, Anthea, have two adult daughters.