Your game plan for a healthier holiday season 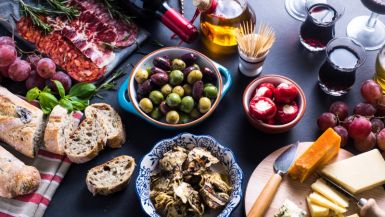 Well, it's that time of year again. Work is winding up as people prepare to go on holidays. Christmas decorations fill the shops, letting you know that the holidays are upon us. You look at your social calendar and it's suddenly full of parties, barbeques, and family gatherings loaded with snack foods, holiday feasts, and copious quantities of booze. Advertisements are now appearing promoting junk food and drinks you’ve been trying to limit throughout the year.

Maybe you're preparing to throw all those healthy habits out the damn window, 'cause there's no way you're making it to New Year's without consuming more food and drink than normal. That's what the holidays are about, after all, and New Year’s will come eventually with its promise of making a fresh start. You can go out, eat and drink without the guilt, and you'll have something to make a resolution about come January.

But deep in your heart, you know it's not true. In fact, if you're serious about living a healthier lifestyle, now's a good time to commit to that. A kilogram or two gained over the holidays might not seem like a big deal, but reverting to healthier eating and drinking habits won't be enough to lose those extra kilograms when the New Year comes around will require even more willpower.

If you want to buck the trend this summer and actually get through the schedule full of social gatherings with your waistline and health intact, we're here to give you a tactical game-plan you can apply to make it through each holiday feast without blowing all your healthy habits for good.

Phase One: The Pre-Game

Okay, first up: let's acknowledge that this won't be easy. All those social commitments that are showing up on your calendar mean lots of meals or situations where someone else makes all the decisions about what's served, and when. While all the usual advice about eating out applies, here are three things that it's really worth doing before you leave the house and head out to your holiday party or barbeque.

Parties are full of landmines if you're trying to focus on eating healthy. Snacks are often high in sugar and salt, the layout tends to encourage grazing, and it's easy to over-indulge without really thinking about it. It can be even worse if you're heading to a barbeque or similar events where snacks are laid out first and the meals aren't actually cooked until everyone's arrived.

The easiest way to control your grazing tendencies is making sure that you're not hungry when you arrive. Chow down on a healthy snack before heading to the party to make sure you're not showing up hungry and overindulge.

Troubleshoot the awkward moments before they happen

There are people who are built to be the life of the party, but for most of us there's always an awkward moment or two. Whether it comes when you're suddenly alone in the middle of a crowd of strangers, or in that moment when you're trapped by someone you really don't want to be talking to, the immediate solution tends to be the same: grab a drink, or go get some food.

Except eating or drinking because you're looking for a distraction (or a plausible way to escape) isn't a great precedent to set, and it's a lousy default habit to get into. The easiest way to break the desire to fill your hands with food and drink is come up with an alternate plan you can use instead.

Take a few lessons from networking gurus and head into the event with strategies to survive the dreaded small talk with strangers. If you're at an event where you really don't know anyone, one useful tactic is to look for people who are in pairs and introduce yourself.

Focus on a realistic goal

We've already talked about the psychology behind holidays being hell on your healthy habits. All those out-of-the-ordinary situations make it easy to give into temptation, and the tendency to beat yourself up for indulging in behaviours you'd sworn to avoid creates a loop where you keep indulging to deal with the fact you failed to keep to your healthier behaviours.

If you've adopted your healthier habits to lose weight throughout the year, it may be time to switch over to maintaining your weight for the next month. Acknowledge that small slips are going to happen, given the season, and keep those indulgencies controlled and guilt-free. It's the best way to keep one slip from becoming a season-long overindulgence that feeds on your guilt.

Phase Two: At The Event

Your pre-game sends you into the party or event ready to get through the festive season with your waistline and health intact, but real challenge happens when you finally arrive on-site. Here are five simple things you can do at the party or event to help keep your holidays healthy.

You may be eyeing up the snack table as the greatest threat to your waistline, but what you're drinking will frequently have just as much impact. We tend to serve soft-drinks, juices, and alcoholic beverages at social gatherings, and all three are loaded with extra kilojoules you'll either burn off or transform into fat.

Regardless of what you're drinking at the party, try to alternate your drinks with a glass of water. Not only will it help stave off a hangover, if you're drinking, it will cut back on the number of kilojoules you consume (and if you’re keen to see how many kilojoules you should be aiming for each day, try the Healthier.Happier daily kilojoule calculator).

On the subject of drinks, it's a good idea to refuse the offers to top up your glass that frequently occur at holiday gatherings. Top ups make it harder to track exactly how much you've drunk, so always make sure you've finished your drink before accepting another.

Sometimes the biggest problem with our diet isn't what we eat, but how much of it we eat. This is particularly true at parties and social gathering where you're asked to serve yourself or grab snacks and finger-food, rather than getting a pre-set amount of food.

The easiest way to control your portions is to take less than you think you want. Consider what you can fit in your mouth, on your plate, or in your hands then halve it. Use an entrée plate instead of a full-size plate, or fold your napkin in half before you load up. And avoid going for seconds or thirds.

It may seem counter intuitive, but if you're going to splurge, eating less is the best way to ensure you enjoy it more. Our enjoyment of a food's flavour diminishes after the first bite thanks to sense specific satiety, so eating very little of a wide variety of flavours will satisfy you more than gorging yourself on chips and dip.

This one's just common sense, but it's easy to overlook - don't loiter around the snack table or the bar. You will eat and drink less if you have to actually go over and collect everything you consume, rather than reaching for the bowl of chips or grabbing another beer from the esky at your side.

Embrace every opportunity to bust a move

All the energy you consume from food and drink gets used for something. Some of it keeps you alive, some of it keeps your muscles moving, and the rest of it gets stored. The best way to counter any extra kilojoules consumed over the holidays is fitting in a little more movement.

So if there's an opportunity to move at your social event, take it. Dance floor? You're on it. There's a game of backyard cricket at the family barbeque? You're in. Pool party? Hit the water early and do a few laps. None of this may burn off the same level of energy as a one-hour walk, but it'll help in the long run.

Phase Three: After The Party

The hard part is over by the time the party's over, but there are still a few things you can do to keep your holidays healthy after you get home. This is your chance to prepare for the next party on the schedule, and help you do even better the next time you're out and about.

Evaluate your evening and adjust your plans

Whether you rocked your plan or it all went to hell, it's a good idea to sit down for a few minutes and took a look at what worked and what didn't.  Were there any points where you ate or drank more than you should? Take a close look at what happened before you made that decision: were you eating out of boredom? Nervousness? Social obligation?

If you can recognise the trigger behind the behaviour, you can figure out a different thing to try next party. Similarly, if things went well, make a note of what worked for you. Write it down and review it in your pre-game ahead of the next event.

Even if you're busting a move every chance you get, you're probably not going to burn off all the extra kilojoules you eat at a well-stocked holiday function. Take a look at your schedule and see if there's an opportunity to slot in a half-hour or more of moderate exercise the day after the event. Here are some quick, easy cardio options you can do in your own home if you're looking for inspiration.

So don't wait until New Year's

It's tempting to look at the holiday season and figure healthy can wait until New Year's, but a diet or exercise plan you start in four weeks time will never be as good as the healthy choices you make right now. For one thing, the choices you make today have more time to resonate and influence the days that follow.

For another, it's long-term lifestyle changes that have the best chance of keeping you healthier and happier, not a short-term fix. Committing to those changes, even over the holiday period, makes it easier to keep improving on your habits into the coming year.