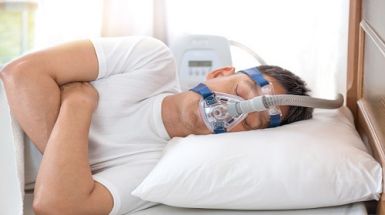 CPAP machines are used to help treat people with sleep apnoea by helping them breathe easier while they sleep.

It’s a common myth that sleep apnoea is just a snoring condition.

It is actually a serious sleep disorder that can cause complications, some of them life-threatening, if untreated.

While it’s a common reason for sleep disruption, it’s also one of the least understood and most under-diagnosed medical conditions.

How does sleep apnoea occur?

Sleep apnoea occurs when the walls of the throat completely or partly close during sleep, blocking off the upper airway.

People repeatedly stop breathing for between a few seconds to over one minute until the brain detects the lack of breathing or drop in oxygen levels and sends a signal to the body to breathe.

The sleeper briefly awakes (often without knowing it), makes gasping, snorting and choking sounds, then immediately falls back to sleep.

These episodes can occur several times each night and are known as apnoeas.

People most likely to have sleep apnoea include those who snore loudly, are overweight, or have high blood pressure.

It is also common in people who have some physical abnormality in the nose, throat of other parts of the upper airway including a narrowed airway and nasal congestion.

Males are up to three times more likely to develop the condition.

Alcohol, sedatives and tranquilisers relax the tongue and throat muscles and interfere with breathing, which can worsen sleep apnoea.

Smokers are also at risk, as smoking can increase inflammation and fluid retention in the upper airways. What are the signs and symptoms of sleep apnoea?

The main signs of sleep apnoea include:

People with sleep apnoea also may breathe through their mouth, instead of their nose, at night.

Symptoms of the condition include:

What are the complications of sleep apnoea?

While the symptoms alone are unpleasant enough, sleep apnoea is bad for your overall health.

There is evidence that people with untreated moderate to severe apnoea are more likely to suffer other health problems.

They have an increased risk of:

University of Queensland researchers are testing whether inadequate oxygen levels during sleep can damage the brain and increase the risk of developing Alzheimer’s disease, the most common form of dementia.

Research lead Professor Elizabeth Coulson said people who suffered from sleep apnoea that resulted in hypoxia – lower levels of oxygen in the blood – were up to three-times more likely to develop Alzheimer’s disease.

Sleep apnoea can impair people’s judgement, balance and reflexes, causing accidents at home, work, in public and on the road. How is sleep apnoea treated?

Sleep apnoea can be effectively treated, leading to an improved quality of life and reduced risk to health.

Doctors may suggest lifestyle changes, including losing weight, cutting back on alcohol, quitting smoking, and avoiding using certain medications such as tranquilisers and sleeping pills.

Patients may be advised to sleep on their side or stomach rather than their back to prevent the tongue and soft palate from resting against the back of the throat and blocking the airway.

Pre-existing medical conditions that contribute to sleep apnoea also need to be examined. For instance, low production of thyroid hormone, large tonsils and nasal allergies need to be treated.

If these measures do not address the signs and symptoms of apnoea, specialist therapies may be recommended.

Devices that help open a blocked airway include:

People with sleep apnoea may be referred to dentists to ensure they receive the correct device and have it fitted.

Surgery is an option if these treatments do not work or the sleep apnoea is severe, particularly if the patient has jaw structure problems.

Procedures designed to alleviate the symptoms of sleep apnoea include:

Removal of the tonsils and adenoids cures sleep apnoea in 80-90 percent of children who do not have other contributing medical problems to the sleep apnoea.

How do I know if I have sleep apnoea?

If you believe you have sleep apnoea, you should contact your GP.

You may be referred to a sleep clinic, where sleep studies may be conducted to determine if you have the condition and, if so, its severity.

Queensland Health’s Sleep Disorders Program provides specialist treatment and support of people who have sleep apnoea and includes nine clinics across the state.