One Queenslander's experience of MS - an interview with Eleanor Rigden Eleanor Rigden has been living with MS for eight years.

About 23,000 Australians live with multiple sclerosis (MS). Each one of them experiences the disease in a different way, with different symptoms of varying severity.

We spoke with one Queenslander, Eleanor Rigden, about her experience living with multiple sclerosis, after being diagnosed eight years ago.

Multiple sclerosis is a disease that affects the body’s central nervous system, which includes the brain, spinal cord and optical nerve. There is no known single cause of MS, but many genetic and environmental factors have been shown to contribute to its development. MS is not directly hereditary, which means while it may be caused by genetics, the disease isn’t passed down through families.

Eleanor was 20 when she was diagnosed with MS. She was away on a camping trip with friends, when she experienced her first serious attack.

“It was quite a debilitating experience,” she says. “I was paralysed: I couldn’t walk. I was going hot and cold, pretty much all night for the first night. And then I had starry vision in the morning, I couldn’t see properly.”

Despite these symptoms, Eleanor didn’t really think anything too serious was going on. She was young and she’d been partying with friends. She figured she was reaping the rewards of too many late nights and too much booze.

Eleanor continued to feel unwell, have trouble with balance and walking in a straight line, off and on for the rest of the trip. She kept quiet about her symptoms, not wanting to ruin everyone else’s holiday.

“It wasn’t very cool to be the girl off in the shadows vomiting into the bushes,” she explains. “I guess it was kind of lonely: you don’t really want to tell people that you’re sick when you’re young.”

Things came to a head when she passed out on the flight home and had to be carried off the plane by Fire and Rescue staff, who then put her in an ambulance. It wasn’t until she returned home that her housemates, upon hearing her story, convinced her that something serious was going on and she needed to see a doctor.

How is MS diagnosed?

Like many complex medical issues, the path to an MS diagnosis can be long. Eleanor’s journey started with a visit to the university GP.

“After my housemates said, ‘You need to go and see a doctor’, I went to my GP and she did a few different tests. I think the big thing for her was when she asked me to stand up and close my eyes and I fell over. For her that was a big sign that something was going on neurologically.”

Eleanor had an MRI, which showed legions and damage to parts of her brain. She was told this indicated demyelination, or an immune system attack, consistent with MS. This, however, wasn’t enough for doctors to give her a definitive diagnosis.

“At first, they won’t say MS; you have to have two attacks,” explains Eleanor. “Instead they say it’s ‘an isolated neurological incident’.”

With an overseas backpacking trip booked, Eleanor wanted to continue living life as normal. She was prescribed medication and told to come back in a year’s time.

While she didn’t experience any more significant attacks, when Eleanor returned, tests showed that there were more patches of damage on her brain. A lumbar puncture (often referred to as a spinal tap) revealed inflammation on her spinal cord. At this point, her doctors were confident that Eleanor had MS. 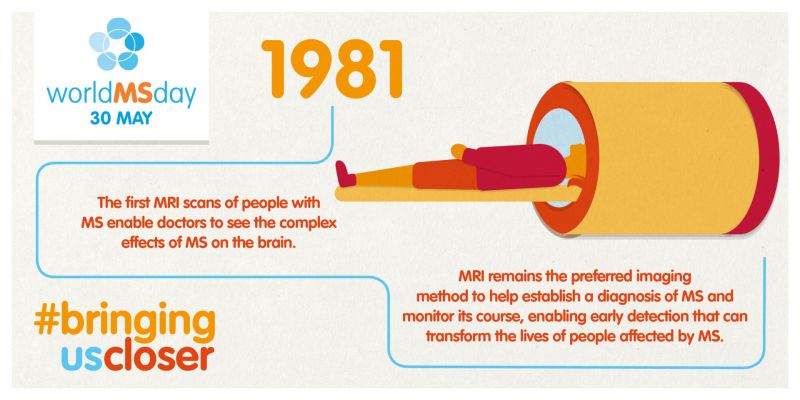 What are the symptoms of MS?

Not all people with MS will experience an attack of symptoms at the onset of their disease like Eleanor did. Some will experience minor or vague symptoms that gradually build or that come and go. Every person experiences MS differently, because of the way the disease develops.

The sclerosis part of the name ‘multiple sclerosis’ means scars, and refers to scarring found on the brain or spinal cord of a person with MS. These scars, also called plaques or lesions, are caused when wrongly programmed immune cells enter the central nervous system and cause inflammation. The inflammation leaves scarring, which damages myelin, the protective covering of the nerve fibres. This disrupts the nerves’ ability to transmit signals, resulting in symptoms of MS.

The symptoms a person with MS will experience will vary depending on which parts of their central nervous system have been affected. They can include:

Most people with MS only experience a few of these symptoms at one time.

It’s normal for people with MS to experience symptoms that come and go over time, sometimes changing or getting worse or better. After her initial attack, some of Eleanor’s symptoms subsided. Now, eight years on, she manages her symptoms with medication and lifestyle choices.

“It really doesn’t impact me greatly now,” she says. “I’ve been put on some really great management medication. My main struggles currently are more fringe things, like trouble with balance. My partner sometimes asks me why I’m so covered in bruises, I just walk into everything! Sometimes I have memory problems.

There have been serious episodes in the past. Like most people with MS, I struggled with my eyes for quite a while. That was quite an alarming time, but it went away after about 6 weeks and it was only in one eye. That was about five years ago.”

Some people experience symptoms of MS that are reasonably manageable, like Eleanor, while others are impacted by serious symptoms that disable them either for periods of time or permanently. 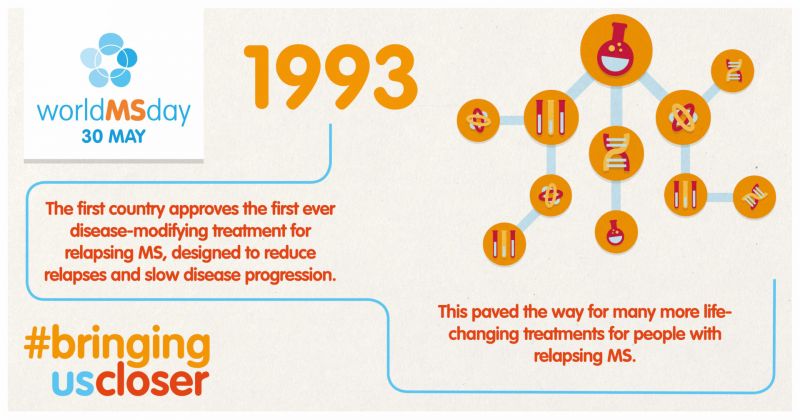 What should people know about MS?

When she was diagnosed, Eleanor, like most people, didn’t know much about MS. After losing her mother to breast cancer a few years before, she remembers crying on the way home from receiving her diagnosis, because she was worried she might lose her hair like her mum had.

“I remember I was going home on the bus from the doctor, and I was crying because I thought my hair was going to fall out; my mum had chemotherapy a few years before. That’s obviously not based in reality at all; I still have a very full head of hair!”

Eleanor has since learned a lot about MS, thanks to her doctors, nurses and MS Queensland, who have helped her find information and a community of other Queenslanders with an experience of MS.

Learning about MS has shown Eleanor how little is known by the public about the disease, and how while some misconceptions just completely miss the mark, others can be damaging to people with MS.

Below, we asked Eleanor to bust a few common MS myths for us.

While often thought of as an older person’s disease, MS is actually the most common central nervous system diseases in young adults, and is typically diagnosed between the ages of 20 and 40.

Eleanor says, “MS is commonly thought of as an older person’s disease, because it typically takes that long for the disease to descend into disability.”

One of the most important misconceptions to put right for Eleanor is that to be disabled, others must be able to see your disability.

MS can disable those with the disease, though their disability is not always apparent to outsiders. Eleanor explains, “I feel like people believe what they can see, and that’s just not the way that disabilities work. There’s a lot that you can’t see.

I’ve seen some horrendous things, people treated in terrible ways. A good example is someone remarking on a woman parking in the disabled park space and jumping out of her car without a visual disability. MS has many invisible symptoms – fatigue, pain, cognitive problems, memory loss, weakness, numbness, balance/coordination problems – so people often don’t understand the disease because they can’t see the disability.

People everywhere are fighting battles that you can’t see. Just because they can walk on their own two feet doesn’t mean that they’re not propped up with braces under their clothes or that they genuinely are out of breath by the time they make it to the shopping centre door.”

Some people with MS will need to use walking aids or wheelchairs to get around, while others like Eleanor may look to outsiders like they’re symptom-free. Eleanor hopes that with more public awareness, people won’t be so quick to judge others without knowing the facts.

MS is not a fatal disease. In fact, having MS does not significantly affect the lifespan of a person. As the disease progresses over time, some people with MS become more significantly disabled, however it’s not possible to predict what course each individual’s MS will take.

“The approach of the nurses is that the disease is set in its course,” Eleanor says, when asked about how she can expect her MS to progress. “The medication and the ways patients are treated aim to maintain quality of life. Obviously, the doctors have an average prognosis of how long it takes for a person to descend into disability, but they won’t give you an individual prognosis.”

Eleanor hopes that as medical research into MS advances, more medications and therapies will be discovered that will help people with MS manage the disease.

Eleanor wants people to know that a diagnosis of MS doesn’t have to make someone a victim to disease.

“It’s a cliché, but they say you’re living with MS, not a victim of MS, and that’s true. You make your routine work so that you don’t have to change the way you live.”

Medication and therapies can help manage many of the symptoms of MS, while Eleanor encourages people to live a lifestyle that enables them to be as healthy as possible, too.

“With MS, like with anything in the brain, lifestyle factors are a really big point. I have quite a few friends who I admire enormously; they’ve really taken their physical health into their own hands, because they were quite physically disabled with their first attack, which is something that I sort of escaped. They’ve managed to get so fit and healthy and treat themselves well with lifestyle choices like diet, you’d barely know there’s anything wrong with them now.”

MS Queensland – What is MS?

Thanks to MS Queensland for providing us with information for this blog, and to Eleanor Rigden for sharing her story. You  can follow Eleanor as she shares more of her story of living with MS on Instagram @eleanor_rigden.