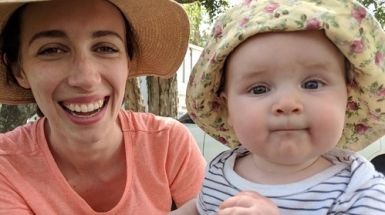 Emily didn't really know what pre-eclampsia was until she was diagnosed in her 38th week of pregnancy.

At 37 weeks pregnant, Queensland woman Emily and her GP agreed she’d had a textbook pregnancy. Nearly ready to give birth, having had a healthy, happy pregnancy, Emily was excited to meet her first baby. But at her 38-week appointment, things took an unexpected turn.

“She was taking my blood pressure, and it was unusually high,” Emily remembers. “The doctor kept taking it and taking it, and it kept presenting really high, which it hadn’t been all pregnancy. She even took me to a different doctor’s office to use a different blood pressure machine, because she thought her machine must have been broken.”

But the machine wasn’t broken. Emily’s high blood pressure was the first sign that she had developed pre-eclampsia, a serious condition that can affect pregnant women in the second half of their pregnancy.

“I could see the doctor trying to be calm, which, to be honest, was terrifying. She asked my husband and I if we had our car. She told us to go straight to the hospital, don’t even go home first.”

Emily was admitted to Ipswich Hospital, where she would be induced to give birth to her daughter the next day.

Pre-eclampsia is a very serious condition that affects about 5-10% of pregnant women. It can come on after the middle of pregnancy, usually from about 20 weeks, and can also be diagnosed up to 6 weeks after a woman has given birth.

The exact cause of pre-eclampsia isn’t known, but it appears to happen when there’s a problem with the woman’s placenta. The placenta is the special organ that a woman grows during pregnancy, that links her blood supply to her baby’s. When a woman has pre-eclampsia, some of the blood vessels connected to the placenta don’t operate properly, which can cause a lot of different issues in the woman’s body.

Until she had it, Emily didn’t really know what pre-eclampsia was. After she arrived at the hospital, her blood pressure still climbing, she was admitted overnight and told she would be induced to deliver her baby the next morning. Her husband had to go home for the night, and she found herself researching the condition she had developed so suddenly.

“I started Googling late into the night, when I should have been sleeping,” she says. “It had been such a whirlwind from the doctor to the hospital, I just needed to find out what was going on.”

Symptoms and signs of pre-eclampsia

Like Emily, some women won’t have any signs or symptoms of pre-eclampsia before their doctor picks up the condition in a routine test. Others will experience symptoms, which can affect all different parts of the body, from the eyes to the feet, and can feel mild or severe.

Signs and symptoms that a pregnant woman might have pre-eclampsia include:

Pregnant women might look at these symptoms and think some of them seem pretty normal for pregnancy, and they’d be right. Swollen feet and nausea affect a lot of women in pregnancy, and most of the time they will not have pre-eclampsia. During pregnancy, women should be on the lookout for changes in their body or new symptoms that develop suddenly. Pregnant women should always call their doctor or midwife if they notice a change or have a concern – even if it seems silly or like it’s probably nothing – so they can check it out. If the situation ever seems like an emergency, call Triple Zero (000) for an ambulance.

If pre-eclampsia isn’t caught or treated immediately, it can cause serious complications that can affect the health of mum and baby, including seizures, problems in organs including the kidneys and brain, and stroke.

How is pre-eclampsia treated?

Sometimes pre-eclampsia and the symptoms it causes can be managed during pregnancy, especially when the baby is too young to be born safely. Doctors might use medications to lower blood pressure and treat other symptoms. For other women, like Emily, who was 38 weeks pregnant, the safest thing to do is deliver the baby and placenta as soon as possible. Delivering the baby and placenta is the only way to cure pre-eclampsia.

“When we arrived at the hospital they decided they wanted to get the baby out as soon as possible,” says Emily. “They gave me some blood pressure medication and scheduled an induction for the next day. They wanted to give me some rest before inducing to help improve my blood pressure. The speed things were moving showed us how serious the situation was.”

An induction is a process that uses medications and procedures like manually breaking a woman’s waters to start labour. An induced labour can be more painful than labour that has started naturally, because contractions usually start more quickly and are stronger. For Emily, who had hoped to have a vaginal birth without intervention, the experience was overwhelming.

“Initially, there weren’t any signs of labour, so they decided to increase the hormone. After that, the intensity just knocked me off my feet, like I couldn’t keep my head above water. Because it hit so fast and I was already scared of pre-eclampsia, my blood pressure kept skyrocketing.”

Keeping Emily’s blood pressure under control was important in keeping her well throughout the birth. But too much blood pressure medication wasn’t ideal for her baby, so the midwives, nurses and doctors had to constantly monitor and adjust how she was being treated.

“When I was only five hours in, I remember thinking that we were still in the early days, and the pain was so bad. My blood pressure was so high, I just thought, I don’t know if I can do this. So, I opted to have an epidural, and the doctors and nurses really supported that.”

Emily’s team knew that pre-eclampsia in itself can be a reason for a rapid and strong labour, and an epidural will often assist in reducing a woman’s blood pressure. The epidural helped Emily manage her pain and feel a little more in control of the situation, which in turn helped her blood pressure come down a little. But she wasn’t out of the woods, and the doctors were carefully monitoring her baby’s health as well.

“There were times when I had so much blood pressure medication in my system, it was making the baby drowsy,” says Emily. “They were quite concerned and watching her very closely, because obviously she needed to get through the birth as well.”

“In fact, when I was pushing, her heart rate dropped quite low, and I remember the doctor was sitting waiting to catch the baby, and she got a midwife to bring over the episiotomy scissors. She said to me, ‘If you can’t get her out in the next push I’m going to have to give you an episiotomy to get her out.’ As you can imagine, that was really motivating, and I pushed her out with the next contraction.”

Emily’s baby girl had a very low heartrate, and the hospital staff went to work checking her and making sure she was well.

“They kind of whisked her away and were taking all these measurements,” says Emily. “It was one of the scariest moments, they were just silent while everyone was working and there was no crying, and we were just sitting there wondering if she was okay. It was a couple of minutes before we heard a little cry, and then they brought her over all wrapped up, because she had to be kept really warm.”

Emily and her baby girl would spend the next four days in hospital recovering and being monitored. Women who have had pre-eclampsia are at risk of further complications after birth and it is recommended they stay in hospital to be monitored and treated.

“For the first 24 hours after birth they were taking my blood pressure every half an hour,” Emily remembers. “That’s a lot when you’re trying to sleep after giving birth! Between persistent monitoring and trying to learn how to breastfeed - by the fourth day I was so ready to go home!”

“At the time, I didn’t have any have anything to compare it to, but my recovery at home was tough. It took at least a week before I was be able to walk the length of the house without having to stop and sit down. I was very drained.”

Can you prevent pre-eclampsia?

Risk factors for pre-eclampsia include:

Pregnant women should discuss with their midwife or doctor what their risk of developing pre-eclampsia is, and if there is anything they can do throughout their pregnancy to manage their risk, such as eating a healthy diet and maintaining a healthy weight.

Apart from being in her first pregnancy, Emily didn’t have any risk factors for pre-eclampsia. Her story is one example of why it’s so important for women to attend their antenatal check-ups with the doctor or midwife, and to pay attention if they notice a change in their body or how they’re feeling. A healthy and happy baby and mum

While the end of her pregnancy and her birth didn’t quite go to plan, Emily and her baby emerged healthy and happy, with no lasting effects from their ordeal. Emily and her husband have since had a second daughter, with a birth experience entirely different to their first.

“I had to do a lot of work during the second pregnancy to not get really stressed because I was scared,” says Emily. “I was scared that it would happen again. I did a lot of meditation, yoga and research, to really try to reconnect with my body and not fear my body.”

“I wanted to go into labour naturally on my body’s own terms. Whatever happened after that, I would accept; I knew all too well things could change. When I went into labour, I was just so happy. It was the major silver lining amongst it all, just getting to a point where I could go into labour when my body was ready.”

Emily’s second birth was much simpler than her first, a story she wants to share with other women who have had a complication like pre-eclampsia, that might have changed their perspective on pregnancy and birth.

“I felt so joyful throughout the labour,” she says. “I didn’t have any drugs and overall it was a smooth vaginal birth. It was a six hour labour. She was born in the morning and then I was home for lunch!”

“Women put so much pressure on themselves to check every box. With my first baby we didn’t get all the experiences I had read were beneficial. She didn’t get skin-to-skin for the first 24 hours. She didn’t have a drug-free birth. But she’s so healthy and happy, she was just fine."

Emily’s experience of childbirth and pre-eclampsia has left her with a lot of respect for her body and for the midwives, nurses and doctors who worked with her at both of her births.

Thanks to Emily for sharing her story and for the staff Ipswich Hospital for providing Emily and her family with exceptional healthcare.