Sneezing 101 - what is a sneeze, why do we sneeze and how to sneeze safely Having a good sneeze can feel great, but what is the point of sneezing?

You know it’s coming; you feel the tickle, your eyes start to water, your nose wrinkles up, and then it happens…ah choo! You sneeze!

Whether it’s an allergic reaction, a viral infection, a change in temperature or a sudden bright light, your nose becomes agitated. When this happens, your body does what it needs to do to get rid of the pesky irritant — it causes you to sneeze, also known as sternutation.

What happens when I sneeze?

When something does enter your nose, like germs, dust or pollen, a message is sent to a part of your brain called the sneeze centre. The sneeze centre sends signals to the parts of your body that need to work together to help you sneeze. Your chest muscles, diaphragm, abdominals, vocal cords and the muscles in the back of your throat all work together to help you expel the irritant.

Why do we always close our eyes when we sneeze?

Have you ever tried to keep your eyes open when you sneeze? You’ll find it’s virtually impossible to do so. It’s not known why this happens, but scientists think that when we sneeze, our brain sends a message to close our eyes (as well as the other signals mentioned above). It’s an involuntarily reflex – like when the doctor taps your knee and your knee jerks.

It is possible to sneeze with your eyes open if you try really hard. But the urge to close your eyes when you sneeze is very strong, and you are fighting against your body’s natural reflex. The body is putting as much effort into clearing out its airway as it can, so keeping them closed is a way to do this. Some people think it’s your body’s way to stop the irritant from entering through your eyes.

Why do I sneeze more than once?

We all know that one person who sneezes, not once, not twice, but three times. Why do these people sneeze multiple times? It’s thought that sometimes, the sneeze is just not powerful enough to get rid of whatever causes you to sneeze in the first place. It might take a few goes for your nose to get out the irritant. It could also be a result of allergies and ongoing inflammation that means you must sneeze more than once.

But what about those “mega-sneezers” – you know the ones – you can hear them sneeze a block away. It’s likely because of the person’s lung capacity and how much air they breathe in pre-sneeze. The more air, the bigger the sneeze! 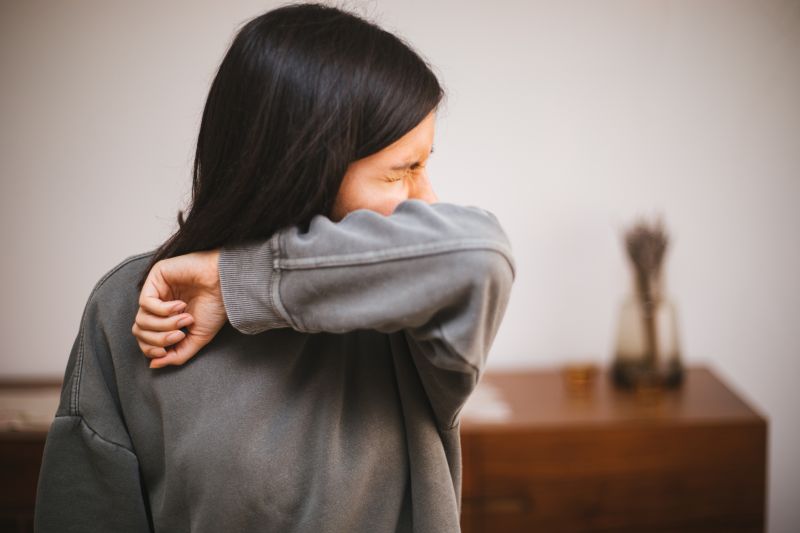 Why is it so important to sneeze correctly?

When you sneeze, droplets are expelled from your nose and mouth which can travel up to two metres away. These droplets may land on surfaces, such as tables, benches, doorknobs and other frequently touched items. When you have a respiratory virus, someone may then touch these surfaces or items and the virus is transferred to their hands. They can then become sick if their touch their mouth, nose or eyes.

Is it bad to hold in a sneeze?

If you do feel a sneeze coming on, it’s important not to hold it in or try to stop it from happening. Sneezes are powerful. If you hold one in, it could lead to increased pressure in your nasal passages and damage blood vessels in your eyes, nose, or eardrums.

What is the best way to sneeze?

You might have used to think it was acceptable to sneeze into your hands. But with diseases like the flu and the common cold, not to mention this year’s COVID-19 pandemic, we all now know that there are better ways to sneeze.

We’ve prepared 5 things you should do when you’re sneezy – not just out of common courtesy, but to help reduce the potential spread of nasty diseases.

How does COVID-19 spread and how can I stop myself from getting it?