It’s all sun and games in Queensland … but there are risks: why protecting your child's skin is so important Parents can help their children develop good sun safe habits by normalising these behaviours in early childhood, at school and at sporting events

Queensland kids are lucky – they get to frolic in sunny weather almost all-year round.

But for all its benefits, our tropical climate also has its risks. The Sunshine State is the skin cancer capital of the world, a title we have held for several years.

It is, however, a tag that we can shed if we improve our sun safety behaviours, especially among children.

How prevalent is skin cancer in Queensland?

More than 3,600 people are diagnosed with melanoma in Queensland each year.

In 2019, 32,398 people were hospitalised in Queensland for treatment of malignant skin cancers. These include 3,475 admissions for melanoma, the most serious form of skin cancer.

Queensland’s skin cancer rates are, sadly, the highest in Australia which, along with New Zealand, has the highest rates of melanoma in the world. 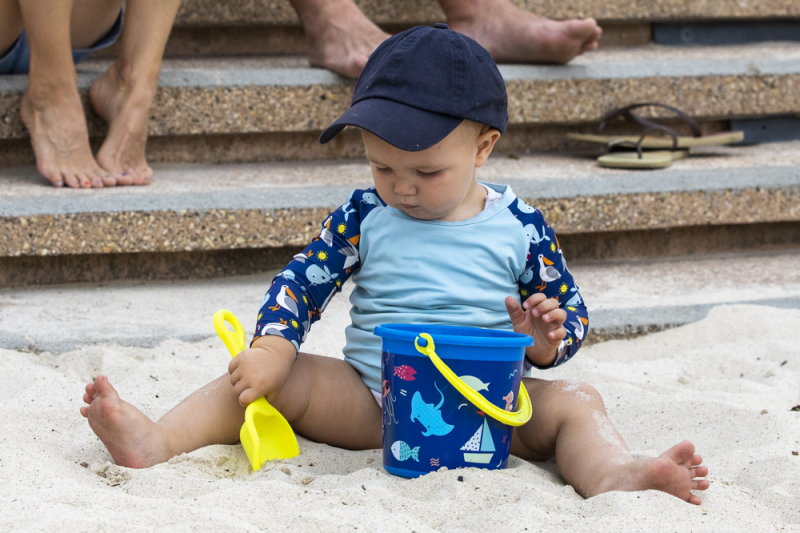 Why are Queensland’s skin cancer rates so high?

The state’s tropical climate increases the risk of sunburn. Ultraviolet radiation (UVR) is the main cause of skin cancer and in Queensland, UVR levels are high enough every day – even on overcast days – to burn our skin and damage skin cells. The longer you are exposed to UVR, the worse your sunburn will be, raising the risk of developing skin cancers like melanoma, squamous cell carcinoma (SCC) or basal cell carcinoma (BCC).

Queensland’s average UV Index, which measures UV radiation intensity, is high enough every month to warrant the use of sun protection every day, throughout the year. It ranges from 4 (moderate) in the winter months to over 13 (extreme) in summer. Queensland’s levels of UV exposure are among the highest in the world.

You can be exposed to UVR during routine activities like hanging out the washing, walking to the shops, or waiting at the bus stop or train station. Short bursts of sun exposure can accumulate, leading to skin damage. Regular exposure during activities like playing sports outdoors, suntanning, swimming in the ocean or working outside, can cause severe skin damage.

The Chief Health Officer’s Health of Queenslanders 2020 report reveals why the state’s skin cancer rates are so high. In 2020, almost half of Queensland’s adults (49%) and children (45%) reported being sunburnt in the previous 12 months. This is almost 2.4 million people – half the state’s population. Of those who had been sunburnt, almost 10 per cent suffered blistering burns.

Research shows sunburn frequency, in childhood especially, increases the risk of skin cancer. Being burnt as few as five times in a decade can increase the risk three-fold.

In Queensland, the health data highlights the need for sun safety policies and campaigns to target youngsters. Of the Queensland children who suffered sunburn, 11 per cent were burnt three or more times. Almost a third of children (32%) had been burnt five or more times in their lifetime. What can be done to reduce the skin cancer rate?

It is important that people of all ages practise sun smart behaviours to protect their skin. Health experts agree that instilling sun safe behaviours among children at a young age is particularly important to reducing the rate of skin cancer. For instance, applying sunscreen as part of a morning routine is one of the most successful prevention strategies, however only 16 per cent of Queensland parents reported doing this for their child.

These should be practised all-year round, every day. Parents can help their children develop good sun safe habits by normalising these behaviours in early childhood, at school and at sporting events.

Early detection is also critical. Get to know your own skin and check it regularly so that you are able to identify any new, or changes to existing, moles or lesions. The Australasian Skin Cancer College offers an online tool to help gauge your skin cancer risk.

Melanoma, the most dangerous form of skin cancer, can progress very rapidly. Make sure you have any new or changing moles checked by your doctor promptly.