Jenny is grateful that her GP paid attention when she mentioned a change in her body that indicated uterine cancer.

How many times have you noticed a change in your body and dismissed it without telling your doctor? A slight twinge or ache, a spot of unusual discharge or bleeding, or a change in mood or energy can all be easy to brush off. But if they continue to happen, they could also be signs that something’s not quite right in your body.

For Queensland woman Jenny, a diagnosis of uterine cancer was the last thing on her mind when she mentioned to her GP she’d been having occasional vaginal bleeding after menopause. The bleeding was so light and so infrequent, she hadn’t really given it much thought. But her GP quickly ordered some tests, and Jenny found out that the cause of her bleeding was uterine cancer.

“It was just an off-the-cuff remark for me, as I was walking out the door of the GP,” says Jenny. “So, it was quite a shock when the gynaecologist phoned me with the results.”

After her experience, Jenny wants all women to know how important it is to pay attention to changes in their body that could point to uterine cancer.

“A lot of women have very busy lifestyles; they’re working mums or they’re grandparents looking after children,” she says. “And some of the symptoms are very slight, it’s easy to just brush them aside. But you need to look after yourself and tell your GP, because they could indicate a lot more is going on.”

What is uterine cancer and who gets it?

Uterine cancer, or cancer of the uterus or womb, is cancer that occurs in the uterus of a woman. The uterus is an organ located inside a woman’s pelvis – it’s where menstrual tissue builds up, and where a baby grows during pregnancy.

In 2019, 3,115 Australian women were diagnosed with uterine cancer. It’s possible for any woman to develop uterine cancer, although factors like age, body weight, physical activity, diet and whether she has breastfed a baby can all affect a woman’s individual risk factor. You can read more about the risk factors for uterine cancer on the Cancer Australia website.

Signs and symptoms of uterine cancer

Like Jenny, some women with uterine cancer will experience unexplained vaginal bleeding outside of their normal period or after they’ve gone through menopause. Not all women will have bleeding, however, and there are other signs of uterine cancer to be aware of.

There is no routine screening test for uterine cancer, which means it’s very important for women to be aware of the signs and symptoms of uterine cancer. Having one or a few of these signs or symptoms is a reason to talk to a doctor:

Jenny hadn’t actually made an appointment with her GP to talk about her vaginal bleeding. It was only when her GP asked if there was anything else to discuss at the end of an appointment that she thought to bring it up.

“I said, ‘Oh look, you know, I’ve just got slight bleeding sometimes'. It’d be lucky if it had been once every three months,” says Jenny.

Jenny’s GP knew the bleeding could be a sign of something serious. She ordered some tests and then referred Jenny to a gynaecologist for internal scans of her reproductive organs and to have a tissue sample taken.

“The gynaecologist phoned me with the results – she actually phoned me the day before I was meant to ring her,” says Jenny. “It was quite a shock. I was then referred straight to a gynaecologic oncologist, who found out that the lining of my uterine wall was 11 millimetres.” 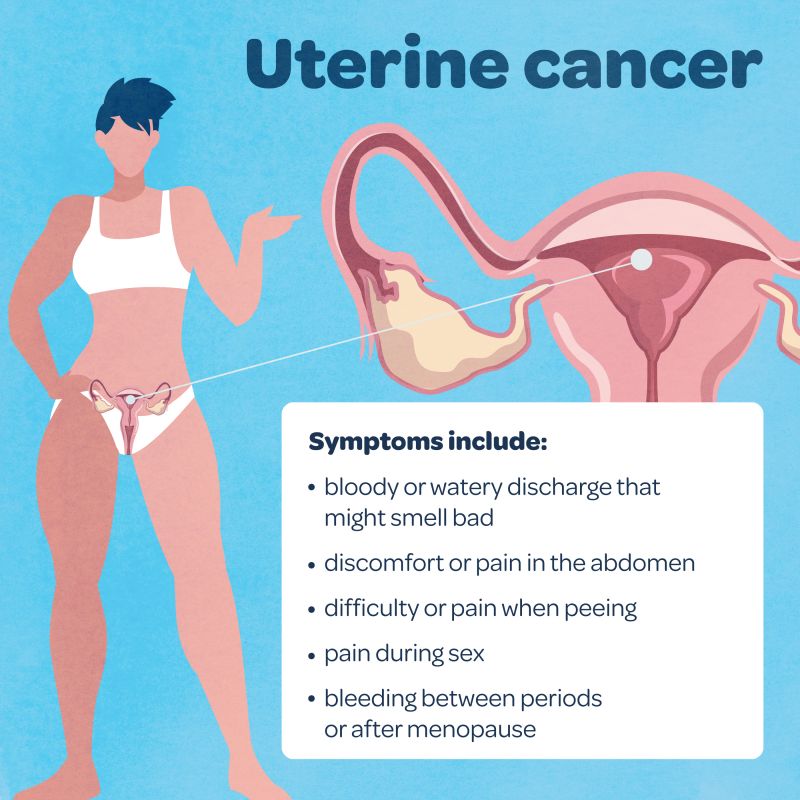 Treatment of uterine cancer depends on exactly where the cancer is and whether it has spread anywhere else in the body. It can involve surgery to remove affected tissue, radiation therapy, chemotherapy and hormone treatment.

Jenny’s oncologist recommended a hysterectomy, which is an operation that removes the uterus and cervix. In women who are post-menopausal, it will often be recommended that their Fallopian tubes and ovaries are also removed when operating for uterine cancer. In pre-menopausal women, the ovaries may be preserved. An assessment of the lymph nodes is made and a biopsy of the first lymph node can be done, to check if the cancer has spread.

“He also took some surrounding tissues as well,” Jenny explains. “He was concerned that it might have left the uterine wall. He checked my fallopian tubes and my lymph nodes to make sure it hadn’t spread,”

Luckily, Jenny’s cancer had been found before it had spread elsewhere in her body, and after the hysterectomy, she was cancer free and needed no other treatment.

“I was really pleased with that, of course,” says Jenny. “I now go in for my checkups every six months to make sure everything’s still clear.”

Jenny’s advice for other women

As well as surviving uterine cancer, Jenny has also had major surgery to remove a brain tumour and lives with diabetes, and she recently nursed her daughter through breast cancer. She knows how scary it can be to notice a change in your body, and how not wanting to receive bad news from the doctor can put people off seeking help. But she also knows that waiting to speak up about a change or symptom could make that news a lot worse in the end.

“My advice for other women is that the earlier you tell someone, the better,” she says. “The longer you wait, the bigger the situation could be, and you could have a more serious outcome. It’s far easier for your medical team to handle a smaller problem than a larger one.”

Jenny also recommends finding a GP you’re comfortable with, who you can trust will listen and take seriously what you have to say about your body.

“If you’re not happy with your GP, find one you can talk to,” she says. “I’m very lucky that I have a GP who is on the ball with things, who listens to me and likes to get things investigated.”

And for women who are currently battling uterine cancer, Jenny says it’s important to take some time to rest and heal, especially after surgery.

“Don’t think that you’re superwoman, or you need to be, and go and do all the things you used to manage to do. It surprised me when I came home from the surgery, how little I could do at first. I have a tendency to worry about everyone else and not myself, but you need to look after yourself and take time to recover and heal up.”

If you have any signs or symptoms of uterine cancer, or you’ve noticed another change in your body that you’re concerned about, you should tell a doctor as soon as possible.

At best, your doctor will find out that there isn’t anything wrong and you’ll be able to put your mind at ease. And if you do have uterine cancer, or a different type of gynaecological cancer, you’ll be able to start receiving treatment as soon as possible.

In Australia, uterine cancer has an 83% five-year survival rate. But successful treatment, like Jenny received, depends on women speaking up when they notice symptoms, however small they may seem.

Jenny is now back to enjoying normal life with her husband, exploring the countryside in their motorhome, and spending time with their family.

“You don’t want to go through it, it’s really scary. But I feel so lucky,” says Jenny. “I like having my feet on top of the earth, not underneath it – that’s what I say!”

What is gynaecological cancer and what are the symptoms?