Steph didn’t have any known factors, so it was a big shock when her doctor told her she had tested positive for GDM.

If you’re pregnant, the number of things to learn and remember might feel overwhelming! There are many things to be aware of: getting the right vaccinations during pregnancy, the do’s and don’ts of what you should be eating while pregnant and the types of care that are available.

Hormones play a huge role in pregnancy, and can be attributed to a lot of weird things that may happen to the body. They also play a part in the diagnosis of gestation diabetes mellitus or GDM.

So, what is gestational diabetes mellitus and what is it like to have GDM? We asked Queenslander Steph what it was like to be diagnosed with GDM and how she managed it during and after her pregnancy.

What is gestational diabetes mellitus?

During pregnancy, the placenta produces hormones that help the baby grow and develop. These hormones also block the action of the woman’s insulin. This is called insulin resistance. When the body cannot cope with the extra demand for insulin production it results in high blood glucose levels and gestational diabetes.

How do you test for gestational diabetes mellitus?

Between week 26 and 28 of pregnancy a  Glucose Tolerance Test is performed. This is a series of blood tests that requires overnight fasting and taking a sugary drink.

A positive diagnosis of GDM needs to be managed as it can have significant effects for mother and baby.

What does it feel like to be diagnosed with gestational diabetes?

Gestational diabetes has become the most common type of diabetes in pregnancy diagnosed in Queensland, affecting thousands of pregnant women. Some women are at a higher risk of being diagnosed with GDM and some women may have no known risk factors. Steph didn’t have any known factors, so it was a big shock when her doctor told her she had tested positive for GDM.

Steph says,“Prior to my diagnosis, I only knew one person who had experienced GDM and she was someone with known risk factors, I just never thought it would affect me too.”

“I was embarrassed at first and felt guilty about what I’d been eating throughout my pregnancy so far. I had morning sickness constantly in the first trimester, and one of the only ways I could make myself feel better was by constantly snacking on all things bread. I was worried that my food choices may have harmed my baby. “

For many women, being diagnosed can be distressing and they can sometimes have feelings of guilt or embarrassment. Steph found that by sharing her story with other women it helped to remove her feelings of guilt and lift the stigma associated with GDM.

Steph was surprised to find out how many people she knew had GD. “It turns out heaps of my mum friends had GDM even though most of them are fit, healthy, young people,” she says. “And plenty more people knew someone who’d had it. It was great to hear their experiences, find out what foods worked for them and how it affected them and their babies.” What happens once you’re diagnosed with gestational diabetes?

It’s important that blood glucose levels are controlled during pregnancy to reduce long-term effects for mother and baby.

A team of health care providers will help manage GDM and an Accredited Practicing Dietitian will be able to provide information on what to eat and physical activity that will help keep blood glucose levels in the target range.

Steph had a group appointment at the hospital with a Diabetes Educator and a Dietitian where they talked a small group of expecting mums through more detailed recommendations. “They talked in more detail about exactly what types of foods we should eat and when, and what should be avoided,” says Steph.

A diabetes management plan is personalised for each pregnancy. Steph monitored and recorded her blood glucose levels and food intake for a week before meeting with a specialist who looked at the data and gave her personalised advice on what worked for her body.

How is gestational diabetes treated?

GDM can often be managed with healthy eating and regular physical activity as well as careful monitoring of blood glucose levels. Steph was initially able to control her glucose levels through diet. She says, “I did a lot of research online to find out the best way to eat, as well as attending the free session with a Diabetes Educators and a Dietitian at the hospital. In terms of diet, it’s mostly about managing your carb intake to maintain healthy blood glucose levels. I was surprised to find out you still get to eat a lot of carbs – you just have to spread them out throughout the day.”

Most women can manage their gestational diabetes effectively by modifying their lifestyle but around 10 – 20% of women with gestational diabetes mellitus will need insulin. Insulin therapy is safe for the mother and the baby as it doesn’t cross the placenta. The insulin is no longer needed once the baby is born. Steph belonged to this small group of women who needed to start insulin as after a while her diet and exercise were no longer enough to keep her blood glucose levels within the recommended range.

When insulin is injected it acts to reduce the level of glucose in your blood. “My fasting level was always too high, and that’s generally just a hormonal issue – not something you can change much through diet,” she explains. “So, I had to start taking insulin. This was terrifying at first because I really hate needles, and suddenly I had to start giving myself a shot every night! But I got used to it quickly, and it did really help keep my blood glucose levels within a normal range. “

Steph shares what a typical day looked like for her during her pregnancy.

“I’d wake up and immediately test my blood glucose levels – they call that a fasted test. Then I’d have breakfast, before getting ready for work. I had to test my blood glucose levels an hour after every main meal, , so I actually had to start waking up earlier to make sure I was still at home an hour after eating breakfast to test – otherwise I’d have to do it on my commute, which is a bit awkward.At work I’d have morning tea, lunch and afternoon tea. I had to test my blood glucose levels after lunch, and all my meals had to be at reasonably specific times to make sure my carb intake was spread out evenly throughout the day. At first it was a little difficult to make sure I always ate and did the finger prick test at the right time – it can be hard when you’re in meetings most of the day.

I’d walk home and have dinner. I would then have to test my blood glucose levels an hour later.  I would often have supper and then give myself insulin before bed. “

How does having gestational diabetes effect pregnancy?

If GDM is appropriately managed with lifestyle changes and medication if needed, a normal delivery is expected with no long-term effects on baby. However, mother and baby will have an increased risk of developing Type 2 diabetes later in life.

Steph says that having GDM helped her to eat healthier and stay active. “It motivated me to eat much healthier, which can only be a good thing for me and the baby.”

A positive GDM diagnosis is considered a high-risk pregnancy which needs more medical appointments. Steph said she found the extra appointments helpful. “I felt really supported by my team of midwives, endocrinologists, obstetricians, diabetes educators and my GP, and got to check in on baby super regularly to make sure she was doing okay. Annoyingly I needed to take a lot more time off work to go to said appointments!”

At 36 weeks Steph’s midwives encouraged her to start expressing colostrum and building up a supply to store in the freezer. Steph says, “They wanted me to start expressing in case my baby had low blood glucose levels after birth.”  Breastfeeding or giving pre-collected colostrum can help stabilise the baby’s blood sugars. “Antenatal expressing was super weird,” says Steph, “But I’m glad I did it – although Mali’s blood glucose levels were fine, we did find breastfeeding difficult at the start, so it was good to have a back-up. “

What does gestational diabetes mellitus mean for the birth of your baby?

When a woman has gestational diabetes mellitus, the aim of management is to normalise the blood glucose levels and ensure that the baby grows normally.  This should mean that the woman should anticipate having a normal delivery.  If there are any concerns, the obstetrician may recommend that the baby is delivered at around 38-39 weeks, through induction. An induction helps the body start labour and can be done several ways.

However, there is a chance that the baby may grow too big.  This is thought to result from too much glucose passing through the placenta to the baby allowing it to grow too large. and may increase the need for C-section.

During labour, blood glucose levels will be monitored frequently, usually hourly, and the amount of insulin given will be adjusted to keep blood glucose in the normal range.

As Steph was managing her GDM through insulin it was safest for her to deliver at 38 weeks and she was booked in for an induction. “The main risk was that I would have a large baby, but when she was born, she was only 3.6kg – in normal range,” says Steph. “I did end up giving birth via emergency caesarean after a long 36-hour labour, but that was not related to GD.”

After the birth Steph stopped monitoring her blood glucose levels and taking insulin. She was also able to stop following her GD diet. “Breastfeeding made me SUPER hungry all the time, so it was great to be able to just eat.” said Steph.

Steph’s daughter Mali’s blood glucose levels were also monitored for the first 24 hours and they all came back within range. 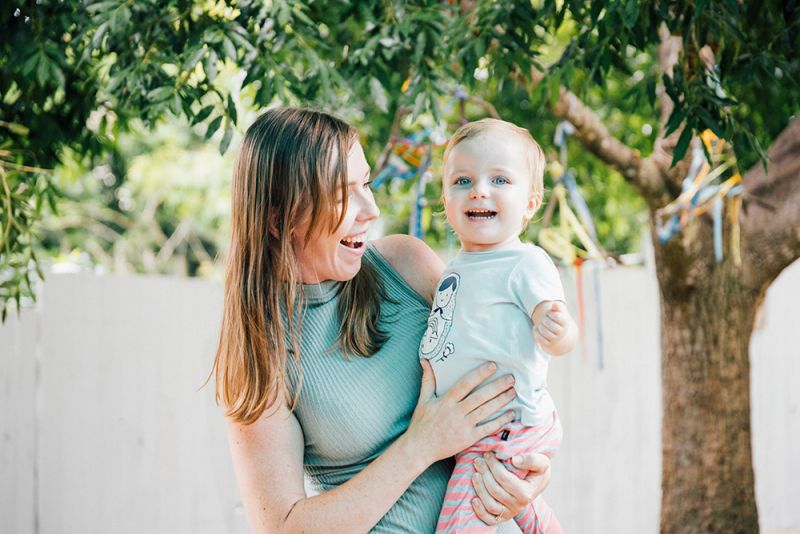 What happens after your baby is born and what does it mean for future pregnancies?

Steph says that the follow up Oral Glucose Tolerance test was a different experience with Mali in tow. “It was much harder because I had a little 6-week-old baby sitting with me in the waiting room for 2 hours,” she says. “But the test confirmed that I was diabetes free!”

Women who have had GDM are at risk of developing Type 2 diabetes later in life and are more likely to develop GDM in future pregnancies. Steph says, “I will now get tested for diabetes every few years.”

For women with a history of GDM, eating well, staying active and healthy and keeping their weight under control can reduce the chance of developing Type 2 diabetes by 50%.