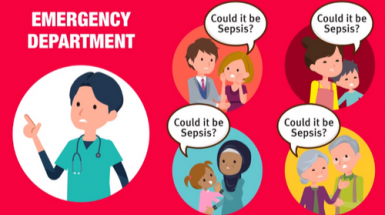 A mosquito bite. A urinary tract infection. The flu. It might seem unlikely, but these conditions share a common trait – all three can potentially lead to sepsis.

In fact, any infection (viral, bacterial, or fungal) can potentially trigger sepsis, a condition caused by the body's abnormal response to an infection.

Sepsis a life-threatening illness. In 2017-18, more than 20,000 people were treated for sepsis in Queensland hospitals; over 2,000 lost their lives. For adults who survive sepsis, half will be left with a permanent disability or impaired function. It is a leading cause of death and disability in children.

You might have heard of sepsis, but could you name its possible signs and symptoms? Knowing what to look for can help you seek medical help quickly. Early detection and treatment saves lives.

Here’s what you need to know about sepsis, how to spot the signs and symptoms, and when to ask, ‘Could it be sepsis?’

Sepsis occurs when the body’s response to an infection causes damage to healthy tissues and organs.

Sepsis can be caused by any type of infection – viral, fungal, or bacterial. It most commonly occurs with bacterial infections of the lungs, urinary tract (bladder, urethra, kidneys), abdomen, skin and soft tissues. It can lead to tissue damage, multiple organ failure and death.

What are the symptoms of sepsis?

You know yourself or your loved one best, and your instincts about their illness can help the medical team in their diagnosis and treatment. It’s important to know what to look for.

Sepsis is an emergency. If you or someone you are caring for experiences any ONE of these symptoms, head straight to the nearest hospital emergency department and ask, ‘Could it be sepsis?’

Sepsis is a life-threatening emergency, with more than 50 per cent of sepsis-related deaths in children occurring within 24 hours.
You know your child best, so trust your gut feeling. If your child is more unwell than ever before or this illness is different from other times – go straight to hospital or call 000 and ask, ‘Could it be sepsis?’ What to do if you suspect sepsis

Sepsis is an emergency that requires urgent medical intervention. Being aware of the signs and symptoms can help you receive timely medical treatment.

Illnesses can change, and an infection might lead to sepsis after you have already been to see the doctor. Even if you have seen a doctor for your concerns, if the signs of sepsis arise, or you are not getting better or getting sicker, trust your gut feeling. Go to the nearest emergency department or call 000 and ask, ‘Could it be sepsis?’

Who is at increased risk of developing sepsis?

Anyone can develop sepsis. However, some people are more at risk than others. Those at higher risk include:

How is sepsis diagnosed and treated?

Sepsis is curable if identified and treated quickly and, in most cases, leads to a full recovery.

If sepsis is suspected, clinicians will run a range of tests to assess vital signs and identify the original infection. The patient may require medications, including antibiotics, and intravenous fluids to combat sepsis and stabilise the body.

Depending on the severity of the case, patients may require other supportive care such as intubation (mechanical assistance with breathing) or dialysis (if the kidneys have been affected). Surgery may also be required to remove infected tissue.

Can sepsis be prevented?

Sepsis can happen after surgery, an illness, or simply by being out and about in the community. It’s not always possible to prevent it. However, the risk of sepsis can be reduced by treating infections appropriately or avoiding them in the first place.