When to worry about croup 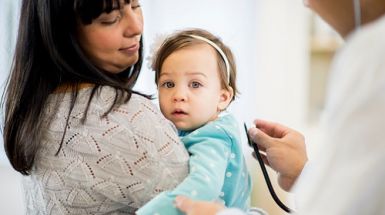 About 28 children a day attend Queensland emergency departments with croup.

For Brisbane mum Jane, the sight and sound of her 20-month-old son struggling to breathe frightened her enough to call triple-zero.

“George had been coughing a little earlier in the day and was a bit congested when he went to bed,” Jane says.

“He awoke suddenly about two hours later with a barking cough and he couldn’t breathe properly. He couldn’t get enough air in and was almost whistling. We had no idea what it was. We were so worried we called the ambulance.”

Believing he had croup, paramedics promptly took George to Prince Charles Hospital on Brisbane’s northside, where their suspicions were confirmed.

Also known as laryngotracheitis, croup is usually caused by a viral infection that causes inflammation of the voice box (larynx), windpipe (trachea) and airways to the lungs (bronchi).

The swelling, along with a build-up of mucus, narrows the air tubes, making it difficult to breathe and causing a harsh cough that sounds like a seal’s bark.

Croup is caused by the same viruses responsible for the common cold.

In Queensland, there are more than 10,000 presentations to emergency departments for croup or croup-like respiratory illnesses each year – an average of about 28 a day. In February this year alone, there were more than 980 ED presentations.

More than 40 per cent of ED croup cases are recorded in Brisbane hospitals, including Queensland Children’s Hospital, which reports 1594 presentations a year. Who is most prone to croup?

The condition affects mainly children younger than five years old. Babies and toddlers are susceptible because they have small, soft windpipes. As their bodies get stronger, they are less likely to contract croup.

Children with asthma, allergies or other respiratory illnesses are at greater risk of suffering a form of the condition called spasmodic croup, which can come on suddenly, with few or no warning signs like cold symptoms or fever.

While older children and adults can get the same virus that causes croup, it’s likely they will only get cold or flu symptoms. One in every 50 to 100 babies will get croup before they turn one year old.

When should I worry about croup?

Croup is usually mild and treatable at home. However, it’s an illness that can quickly become serious.

Severe croup can cause breathing difficulties in general but if your child’s skin “caves in” around their neck or ribs when they try to inhale, you should seek urgent medical treatment.

Serious infections can also cause stridor, which is noisy breathing, often high-pitched, caused by the narrowing of the airway. If you’re not sure if your child is experiencing stridor, there are many audio and video clips online but it’s important to note that the sound may vary depending on where the airways are obstructed. The best course of action is to see a doctor immediately.

Urgent medical help is also needed if your child:

What is the treatment for severe croup?

To relieve the symptoms of severe croup, doctors may prescribe a steroid medication; orally, inhaled or injection. Steroids decrease the intensity of the symptoms, the need for other medications and time spent in the hospital.

Children with viral croup may also be given oxygen and nebulised adrenaline – a form of mist inhaled into the lungs – to reduce the swelling of the airways while the steroids take effect.

Until help is available, it’s important to keep your child calm; if they are distressed, their symptoms will worsen. Sitting them upright also can help them breathe easier.

Children’s paracetamol can help lower their fever and make them feel better. Steam treatments and vaporisers can ease cold and flu symptoms however they are not effective for treating croup.

Jane says George’s condition improved quickly after he was given a dose of steroids.

“Within a few hours, he seemed much better,” she says.

“He was still coughing and sounding raspy but he was breathing properly, which was a relief.”

Can croup be prevented?

It’s difficult to prevent croup however you take precautions to help them avoid catching colds or other viruses that cause infections.

Basic hand hygiene is important; washing your child’s hands after they’ve sneezed, coughed or blown their nose, and before they eat can minimise the spread of germs. Regularly cleaning household surfaces during cold and flu seasons can help reduce viral infections.

You can protect other kids from getting infected by keeping your child away from child care, preschool, school, playgrounds and other public areas for at least three days or until they no longer have a fever.

If your child has croup and is displaying mild symptoms, see your GP. If they have severe symptoms, call triple-zero.