Why you should give blood: in the words of those who have Each whole blood donor can save three lives with their donation.

Have you ever thought about donating blood or plasma? This World Blood Donor Day, we’ve asked blood donors to share why they donate, and why they would encourage you to donate, too.

Lauren (27, Gordon Park) donated for the first time this May.

“It’s something I had thought about doing for years. Recently, I saw a post on Facebook by the Australian Red Cross calling for more donors, and I decided to just do it. After my first appointment I booked straight back in to donate again in three months’ time.

The Red Cross gave me so much information before I donated: they called on the phone, sent text messages and a letter, so I felt really prepared on the day. When I was there, all the nurses and staff were so friendly, answering any questions I had and making sure I was comfortable.”

Having recently made her fifty-first donation, Sarah (47, Redcliffe) shared her reasons for donating, which range from the community driven, to the very personal.

“It’s my way of giving back to the community and it makes me feel good.  As my partner is going through chemo for leukaemia at the moment, I am even more conscious of how vital and useful blood donations are. Seeing it first-hand makes it very real.

The need for blood is constant so donations are crucial.  It doesn’t cost anything, is only an hour of your time, you can do it outside normal business hours and it really does save lives.  How can that not make you feel good?”

Both Andrew (33, Cleveland) and Stephanie (30, East Brisbane) were very scared of needles before they donated. Andrew couldn’t watch needles being given on the television, but while studying to become a paramedic, decided it was time to face his fears.

“I thought, ‘This is silly, I’m going to have to get used to this.’ So I started donating blood.

Blood and its associated products are one of the few things we can't make in a lab yet. This means if someone is in need of blood it has to come from someone else. You never know when you might need some yourself, or a family member.”

Stephanie said that while her needle phobia was so bad she was scared of going to donate not only the first, but the second and third time, she kept going back.

“Even though I get a bit anxious, I know that what I’m experiencing is nowhere near as bad as what the person who needs that blood is going through. It’s all about perspective.

I would tell anyone who is scared of donating that it’s really not as bad as you think. Just focus on the fact that you’re giving someone a second chance at life, and hopefully your fears won’t seem so hard to overcome.”

Joanne (33, New Farm) frequently travels internationally, which impacts how often she can donate because there are waiting periods to ensure her blood is completely safe to use. Even so, she says she donates as often as possible.

“One in three people will need a blood transfusion at some point in their life and not many people I know donate. Therefore I figure that since I'm able to donate I should do my bit. Plus the banana bread is great!”

Joanne encourages people thinking about donating blood to, “chat to someone that donates regularly or even the Red Cross staff. Call the Blood Bank hotline - the call centre team are super helpful. They will be able to give you a clear idea of what is involved in donating to ease any concerns you may have.”

As a recipient of a blood transfusion herself, Toni (46, Eatons Hill) had firsthand experience with the lifesaving effects of donations.

“I had lifesaving surgery when giving birth to my baby, and would have died without the kindness of strangers.  So I wanted to make sure I could do the same for others.

You never know when you will need the kindness of others to stay alive.  So one way to thank them is to ‘pay it forward’.” 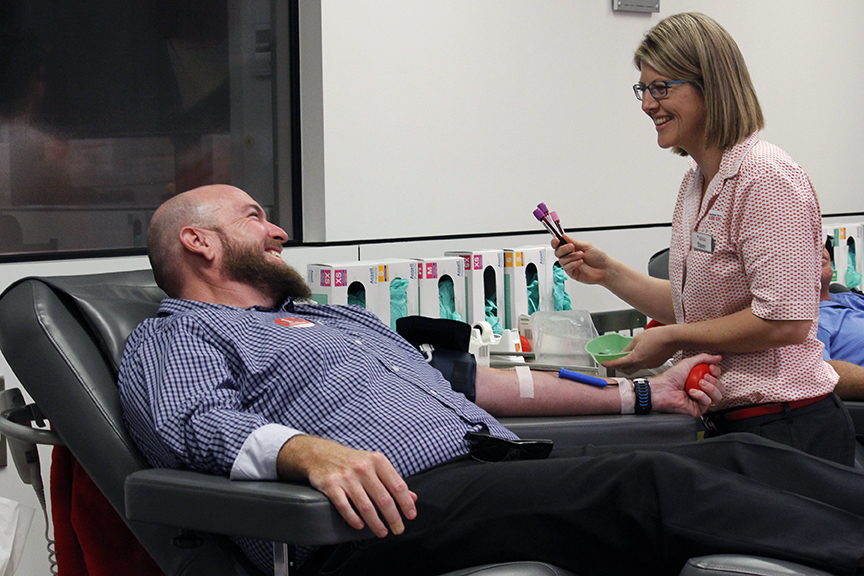 Jack (31, Ferny Grove) first donated to help during an emergency, then became a frequent donor.

“The first time I donated was in India during an emergency situation, when one of my lecturer’s relatives was admitted to hospital and was in need of O+ blood. I knew I belonged to the blood group. I had my hesitations, I was 18 then, but seeing nobody raise their hands in my class, I put up my hand.

Later on, the lecturer came and thanked me personally and I was quite happy to hear that they were able to save the life of their relative. It was a very special feeling that my blood donation helped to save a life and ever since I have made it a point to make regular blood donations.”

If you’re interested in donating blood, visit the Australian Red Cross Blood Service website to learn more about how blood donation works, who donations help and the types of donation possible. Take the quiz to find out if you are eligible to donate, or call 13 14 95 to talk to Red Cross staff about donating.