What’s it like to be diagnosed with vulval cancer? Queensland woman Pam shares her story It’s been nearly 20 years since Queensland woman Pam was diagnosed with vulval cancer, but she still remembers the day clearly.

“I went in for a pap smear,” she says. “The doctor said to me, ‘That looks a bit weird, you’ve got a lesion down there. I’m not happy with that, I want it looked at.’”

Pam’s doctor referred her to a gynaecologist. After a biopsy of what was actually two spots on her vulva revealed cancer, she was scheduled for immediate surgery.

What is vulval cancer?

Vulval cancer (also known as vulvar cancer or cancer of the vulva) is cancer that occurs on the genitals on the outside of a woman’s body. This includes the labia minora and labia majora (you might know these as your inner or outer lips), the clitoris, the pubic mound and the perineum, which is the skin between your vagina and anus. Vulval cancer is more common in women who have gone through menopause, but it can affect women at any age.

Pam’s vulval cancer was on her labia near her clitoris. She was quickly scheduled for surgery to have it removed.

“They did two different operations,” says Pam, “The surgeon was very aware of not damaging that area of my body. Then there was some scar tissue, which they took off later.”

Left untreated, vulval cancers can spread to other areas of the body, like the vagina and lymph nodes. In good news, Pam’s cancer hadn’t spread to any other parts of her body.

Vulval cancer is a type of skin cancer. You can get different types of skin cancer on your vulva, including squamous cell cancer (the most common), melanoma, adenocarcinomas, verrucous cancers and sarcomas. Pam’s cancer was a melanoma, which she didn’t realise could happen on a part of the body that had never seen the sun.

“When I went to the gynae up in Brisbane he asked me if I’d been sunbaking in the nude!” she remembers. “I went, no, I was a bit of a prude for that!”

While sun damage is a major cause of melanoma, this type of skin cancer can occur on areas of the body that have never been exposed to sunlight. It’s very important for women to know that if they notice a change to their vulva, even if there isn’t a cause they can think of, they should get it checked out.

What are the symptoms of vulval cancer? 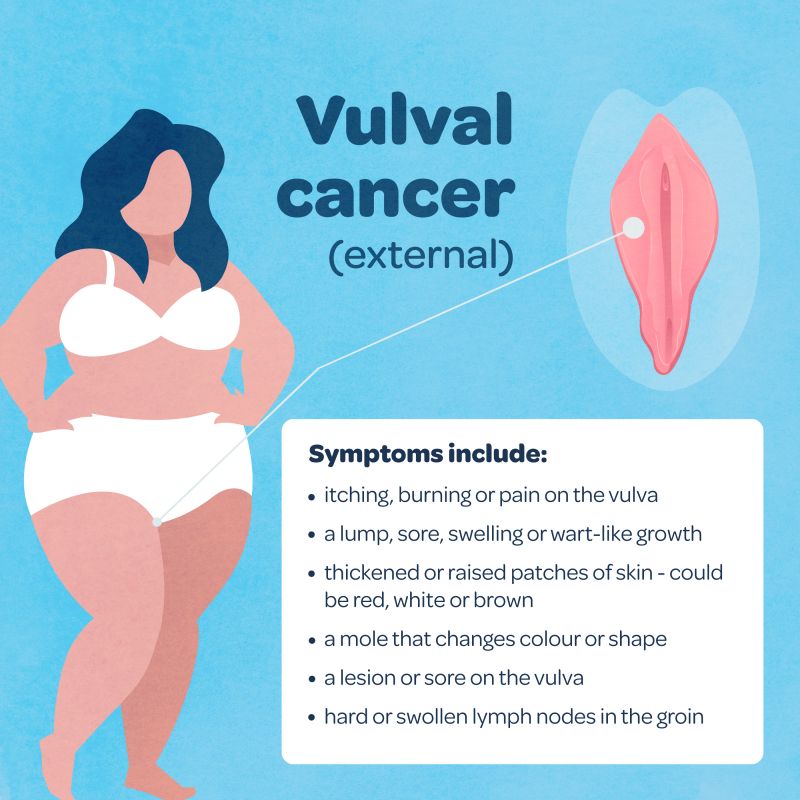 Symptoms of vulval cancer can include:

Some women might not notice symptoms of vulval cancer themselves, especially because it can be a tricky part of the area to see yourself. Pam recommends that women get the regular, recommended checks like their Cervical Screen, which has replaced the Pap smear, so that their doctor can also make sure there’s nothing odd going on.

How common is vulval cancer?

Vulval cancer isn’t as common as other cancers – each year about 280 Australian women are diagnosed with it. This means that many women haven’t heard about it and don’t know what signs to look out for, which is one reason why Pam is sharing her story.

“It was new to me, put it that way,” says Pam. “When someone tells you, you might have cancer down there, you go, ‘Holy cow!’. I’m grateful for that doctor who picked it up. I reckon she’s my lifesaver, that one.”

What should I do if I’ve noticed a change in my vulva?

If you’ve noticed any of the above symptoms or another change to your external genitals, you need to show a doctor. It’s really tricky to properly self-examine your vulva – it can be hard to get a good look down there! Tell your GP or gynaecologist about any changes you’ve noticed and they can take a look and do any tests that are necessary.

There is no proven screening test for vulval cancer, so it’s important that you get to know the normal look and feel of this part of your body and let your doctor know if you notice any changes.

How can I prevent vulval cancer?

HPV can sometimes cause vulval cancer, so as with cervical cancer, you should check with your doctor if receiving a HPV vaccination would be suitable for you.

Smoking also raises the risk of vulval cancer, so if you’re a smoker (even a social smoker) it’s time to quit! You can find resources to help you quit smoking at QUIT HQ.

Pam’s recovery and life after cancer

Treatment for vulval cancer will depend on how developed the cancer is when it’s found, but can include surgery and therapies like chemotherapy and radiation.

“I was very lucky,” says Pam of her treatment and recovery. “I didn’t have any chemo or radiation or anything like that.”

While she no longer has to have check-ups as often as she did after her surgery, Pam says she still has her doctor check her out regularly.

“I went back at two months, six months, a year and then two years to have it checked. And I still have it checked out every now and then – they’ve got to take a quick look, because obviously, I don’t see down there!”

Pam now encourages other women to be aware of their vulval health.

“Make sure you get your checks and ask questions if you don’t know something or you see something,” says Pam. “I was very lucky I had a good doctor. Find someone you’re comfortable with, and make sure you’re looking after yourself.”