Why the 2021 flu vaccine is so important One of the interesting effects of COVID-19 and the measures brought in to contain it is that we had fewer flu cases than usual in Queensland in 2020.

Queensland Health’s data shows that over the five years from 2015-2019 there was an average of just under 38,000 lab-confirmed cases of flu a year.

There were just over 6,000 cases in 2020 – a very dramatic drop. Most of those cases occurred in the first three months of the year.

The reduction in cases of flu was not just because of the lock down. There were a range of public health measures to limit the transmission of COVID-19 infection. These included closure of state, territory, and international borders, reduction of large gatherings, social distancing, hand hygiene, and wearing face masks. These had the added benefit of reducing flu cases.

The dashed and dotted red line in the graph below is the data for 2020 lab-confirmed flu numbers for Queensland showing how they dropped off rapidly in March/April and remained low for the rest of the year. 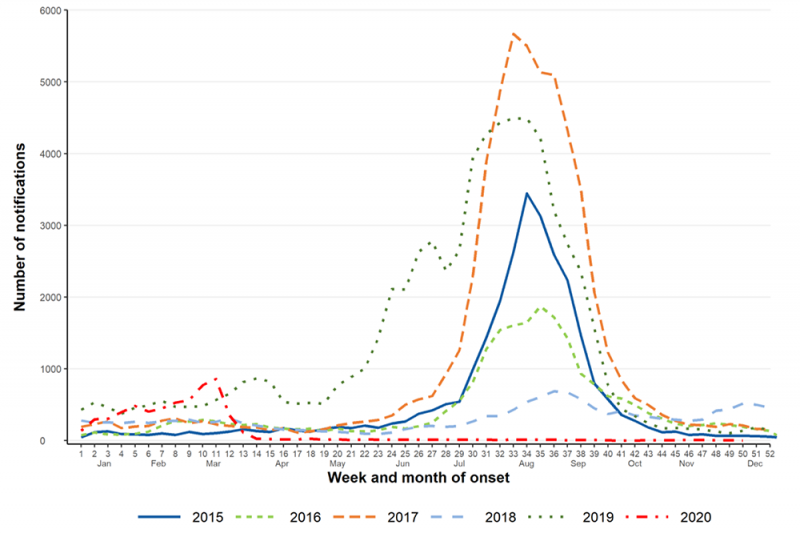 So, if there’s not much flu around, why bother getting vaccinated?

There are several very good reasons.

Flu has not gone away completely. We could still face a significant flu season so it’s important not to lose sight of making sure we get our flu jab each year.

There is also the chance that you could get COVID-19 and the flu at the same time, particularly if you have not been vaccinated against either.

Importantly, getting vaccinated against the flu helps protect vulnerable people who cannot get vaccinated, such as infants and people with weakened immune systems.

While most people recover from the flu in about a week, sometimes the flu can lead to other serious health problems like bronchitis or pneumonia or make a person’s existing health problems worse.

Complications from the flu can be deadly: on average the flu causes an estimated 3,500 deaths in Australia each year.

Influenza is caused by a virus, which is a tiny infectious germ that hosts itself in another living organism’s cells. Influenza viruses are classified into different types and sub-types. Influenza A and B are responsible for most of the illness in humans.

Different strains dominate each year. Some strains may be more severe in certain age groups. For example, the dominant strain in 2017 was H3N2 and this had a greater impact on older age groups.

Influenza viruses can evolve and mutate allowing new strains to emerge, against which people may not have immunity.

The best protection against flu is to be vaccinated against it

The flu is highly contagious, spreading when an infected person coughs or sneezes. Droplets containing the influenza virus also settle onto surfaces, such as telephones and doorknobs, and can then pass from hands to the nose, mouth or eyes. People with influenza can be infectious to others from 24 hours before they display symptoms until a week after the start of symptoms.

It’s recommended that all Australians over six months of age get a flu vaccine each year.

They should have the vaccine for two reasons:

In Australia, the vaccine is provided for free for people aged 65 years and over, pregnant women, Aboriginal and Torres Strait Islander children and adults, and people with certain medical conditions which increase the risk of complications from influenza such as severe asthma, lung or heart disease, low immunity or diabetes.

It’s important to get a flu shot every year as the circulating virus strains change. Receiving the vaccine from April allows protection from the flu to develop well ahead of the peak transmission period, which usually falls around July and August. 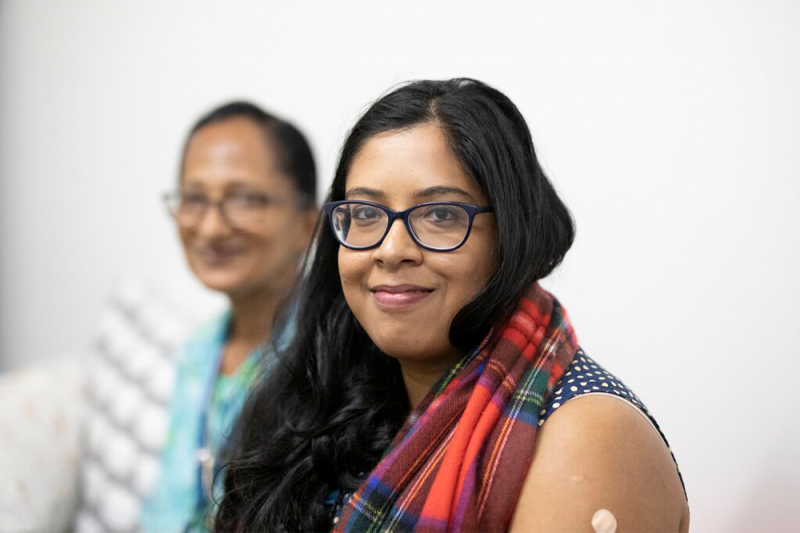 How is the flu vaccine made?

In February and September each year, The World Health Organization (WHO) holds a conference with leading experts and influenza centres from around the world to make recommendations about the composition of the next season’s flu vaccine.

They look at all the current information about influenza, including the recent patterns of flu epidemics across the world, to decide which strains of flu are likely to be most common in the next flu season. Vaccines are created to protect against these strains, usually containing three or four strain vaccines.

For countries in the Southern Hemisphere, like Australia, the information from the September conference helps them plan for flu vaccines for the following winter. After the conference, the Australian Influenza Vaccine Committee meet with the Therapeutic Goods Administration to confirm which strains will be included in the Australian flu vaccines. The vaccine funded for the National Immunisation Program in Australia contains the two strains of Influenza A most commonly circulating and the two Influenza B strains.

These vaccines then need to be made. It’s a long and time-consuming process, with large amounts of each virus strain needing to be created to make enough vaccine doses.

Please follow the first link in the More information section below to what strains are included in this year’s vaccine.

Both the flu virus and the virus that causes COVID-19 are circulating this year, with symptoms that can be similar. Refer to Symptoms of COVID-19 compared with flu, common cold and allergies for more information.

Always stay at home if you have any symptoms at all and get tested.

The Australian Technical Advisory Group on Immunisation (ATAGI) has changed it's advice and you can now get vaccinated against both 7 days apart.

On 9 April 2021 the Australian Government updated its advice on the rollout of the AstraZeneca vaccine.