Here's why the five second rule is just an urban myth 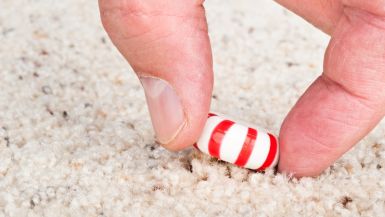 Do you apply the five second rule to food that you've dropped on the floor?

Have you ever applied the five second rule to food that you've dropped on the floor? It's always a temptation, when cooking in our own homes, because it's easy to convince ourselves that a few seconds of contact isn't really enough to contaminate our tasty food with germs.

Fortunately, scientists at Clemson University have actually put the five second rule to the test and discovered something interesting: the time spent in contact with an infected surface isn't much of a factor when it comes to transferring bacterial infections.

What did have an impact on the infection levels after the food was picked up were the type of surface you drop your food onto, and the intensity of the infection it comes into contact with. Wool carpet was particularly bad at transferring infection, wooden floors and tiles were good at it, and high rates of bacterial infection were bad news regardless of what you dropped your food onto.

So it turns out the five second rule is a complete urban myth - if you hit an infected patch of floor, it doesn't much matter if your food is there a few seconds or a few minutes. And while the odds of dropping your food in a virulent pool of bacteria living on your freshly cleaned carpet may seem relatively slim, any threat of cross-contamination is a good thing to avoid when it comes to what we eat.

Protecting your food from cross contamination

Cross contamination occurs when one object becomes contaminated by either direct or indirect contact with another object which is already contaminated. There's a short-list of bacteria that are a concern in when it comes to food: norovirus, pathogenic E. coli, Campylobacter species and Salmonella species. All four of these bacteria are spread by contact, and just a few cells of bacteria like E. coli are enough to be a serious threat to your health and the health of those around you

Cross-contamination isn't just at threat when you drop food on the floor. These bacteria are also present on the surface raw foods like meat and poultry, and they can easily accumulate on the hands and skin over the course of living your day. They can get transferred to your food through an improperly cleaned cooking surface, or a knife used on raw meat that's then used to slice vegetables, just as easily as they transfer from floor to food.

Fortunately, you can limit your exposure to food-related bacteria just by practicing four bits of food safety:

Find out more about food safety at the Queensland Health website.